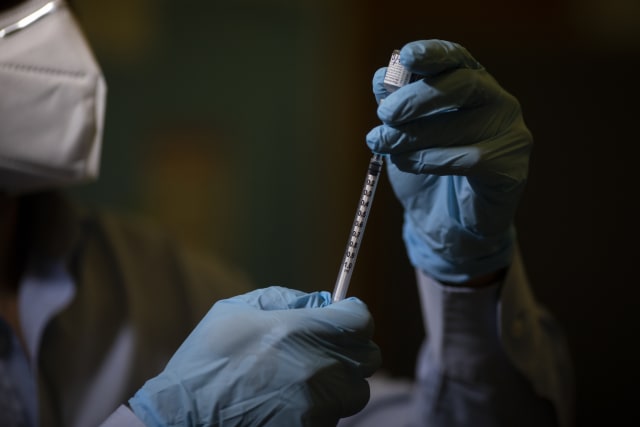 Staff at a mass vaccination centre in Cardiff have tested positive for Covid just days after it opened.

Cardiff and Vale University Health Board (CVUHB) did not confirm which centre was affected, but said anyone identified as a close contact would be asked to self isolate.

It comes as new testing sites are being opened around the city due to a surge in cases, with Covid-19 infection rates in the Welsh capital having risen by 90% in the past week alone.

In a post on Twitter, CVUHB said: “We can confirm that a number of staff have tested positive at one of our Mass Vaccination Centres. We are implementing testing of staff at the centre and anyone that is identified as a close contact will be asked to self-isolate.

“Currently, no additional risk has been identified to anyone who has been vaccinated at the centre. We would like to take this opportunity to remind the public that the virus is still prevalent in our local communities.”

According to the BBC, the vaccination centre is in the Splott area of the city and nine staff have tested positive.

Cardiff Council said the city’s test positivity rate of 18% shows it is “clear the virus is spreading through the community, making it extremely difficult to contain”.

Additional local test site locations which could be available in January are yet to be confirmed.

Council leader Huw Thomas said residents should book a test if they are feeling unwell or are displaying any of the symptoms linked with the virus.

He said: “I want to be clear that there is plenty of capacity in the system, and it has never been easier to get tested.

“If you are showing symptoms or suspect you may have Covid-19, then you owe it to yourself and your loved ones to get yourself tested as soon as possible.”

He added: “We are at a stage now where the rise in numbers is stark. If we don’t follow the rules, our NHS and our services could be overrun by Christmas. The current predictions are dire.

“Hospital resources are being stretched and staff pushed to the limit following their experience at the sharp end of the pandemic.”

Mr Thomas said there have been nearly 16,000 confirmed cases within Cardiff & Vale University Health Board, with 11 people currently in intensive care units and 278 medical and nursing staff unable to work because they are self-isolating.

He added that a large number of police officers are also self-isolating after contracting the virus on shifts which involved breaking up illegal gatherings.

Figures calculated by the PA news agency based on data published on the Public Health Wales dashboard shows Cardiff had the 10th worst case rate in Wales in the seven days to December 10 at 450.8 per 100,000 people.