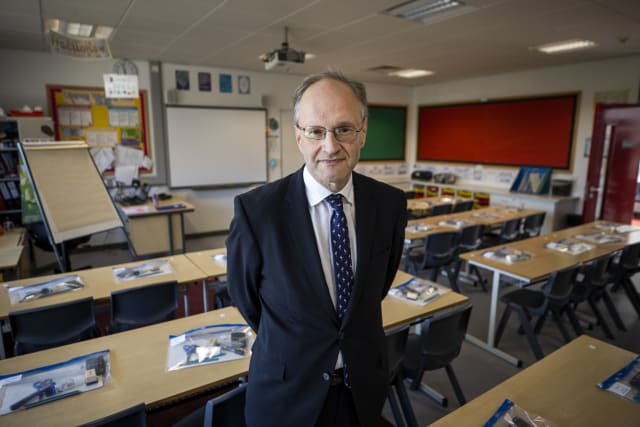 Secondary school students in Northern Ireland will sit fewer exams next year and be subject to a more generous grading regime, the education minister has announced.

Peter Weir introduced a series of mitigating measures for GCSE, AS and A-levels to reflect the disruption to learning caused by the coronavirus pandemic.

Mr Weir also raised the possibility of added marks or allowance for students who had missed significant school time due to the impact of the virus.

The minister reiterated he would not be cancelling exams in 2021 but said he accepted there was a need to make adjustments so pupils would not be disadvantaged by the exceptional circumstances.

The moves come after exams were cancelled this summer and subsequent efforts to award calculated grades became mired in controversy.

There was an outcry from many schools, pupils and parents in Northern Ireland when a statistical algorithm used to standardise results reduced more than a third of A-level grades predicted by teachers.

In response, Mr Weir scrapped the standardisation model and announced pupils would be able to receive the grades predicted by teachers, even though it saw results averages soar.

Plans to apply standardisation to GCSE results were also binned.

Mr Weir said the experience of the summer had reinforced his belief that exams should go ahead next year.

“I have heard the calls from some for me to cancel exams,” he told MLAs.

“Those voices have been loud and public. But I have also heard the quieter voices of those who are equally anxious that exams should go ahead and have urged me to stand firm on this.”

He added: “It would be easy to make a seemingly populist decision, but being in government is about making the right decision in the interests of all. Whilst on the face of it simply cancelling exams would seem like a good approach as we sit here today, I do not believe it is the right longer-term approach for our young people.”

In October, Mr Weir announced changes to GCSE exams that would enable students to omit assessment of one unit of each of their qualifications, up to a maximum of 40% of each qualification.

On Tuesday, the minister announced similar changes to AS and A-levels.

Under the measures, young people will have the opportunity to omit up to 60% of their AS or A2 assessment.

In many subjects that will see pupils only taking one unit of assessment. Unit or units assessed must add up to at least 40% of the AS or A2 qualification.

“At the centre of this reduction is choice,” said the minister.

“Our schools and colleges will choose which unit or units of assessment their pupils will take. Our young people will be assessed on topics and content in which they feel most confident and well prepared, allowing them to demonstrate their skills and knowledge to the highest possible level.

“In line with the emphasis on choice, candidates will be able to take all of their AS or A2 units, if they so wish.”

He added: “I believe these changes will relieve much of the stress which our young people are experiencing. This approach will allow them to focus on key topics for a small number of examinations whilst enjoying teaching and learning in other areas of the qualification, which will not be examined.”

Mr Weir said the grades would be awarded in line with the above-average results generated by the teacher-calculated grade system that was ultimately used in 2020.

“I want to reassure all of our young people that we will take a generous approach to grading, similar to that announced in England,” he said.

“These are extraordinary circumstances in which you have had to complete your qualifications.

“In recognition of the challenges this cohort has faced and is facing, I have decided that grading will carry forward the overall generosity and standards of 2020.

“This will ensure the 2021 cohort are treated fairly, relative to their 2020 peers.

On the prospect of additional marks being awarded to students who had missed a significant amount of school time, Mr Weir said there was a need to reach a common approach across the UK.

“There will be a need to develop Covid-specific special circumstances for young people,” he said.

“I will explore the possibility of a Covid allowance or tariff for young people who have missed a significant number of days face-to-face teaching due to self-isolating. This would allow for specific account to be taken of the variations in disrupted learning since September.”

The minister also announced a specific measure for students taking GCSE maths next year. He said they would be provided additional support material, so they would not have to memorise all of the information they would normally have to.

“I hope they will feel more prepared and more confident as a result,” he said.

“This aligns with recent announcements in England.”

Catholic at centre of life-support dispute has died, lawyers say