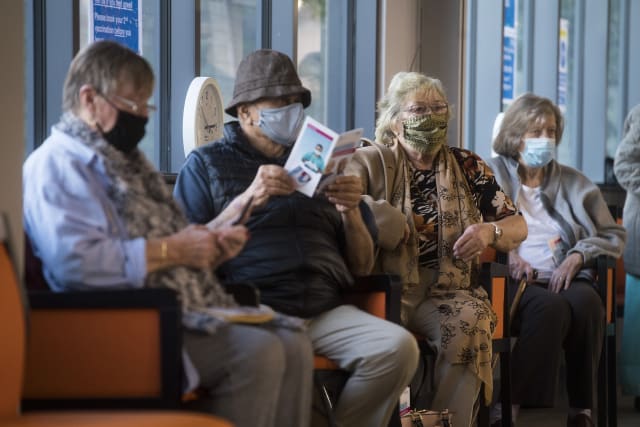 People queued in the rain to get their coronavirus jab as a major GP-led vaccination centre opened at a football stadium on a day one doctor described as “momentous”.

Practices in more than 100 parts of England have begun offering the Pfizer/BioNTech vaccine this week, setting up centres in villages, towns and cities across the country.

In north-west London a stadium bar area has been turned into a vaccination site and five healthcare workers were the first to get the jab on Tuesday.

The Hive in Harrow is normally home to Barnet FC and the London Bees women’s team but it will this week see some of those most vulnerable to Covid-19 vaccinated against the disease.

Dr Meena Thakur, clinical director of Harrow East Primary Care Network, said: “This could be the start of us beginning to get back to some sort of new normal, so this is a momentous day for us all.”

She said local healthcare staff had worked round-the-clock to get things ready in just one-and-a-half weeks after being notified they would be getting the vaccines.

“We have converted what was a bar underneath one of the stands of Barnet Football Club into a mini hospital and clinic,” she said.

“To turn that all around, pass all the regulatory requirements and all of that, and to get patients booked in and everything has been no mean feat. We’ve worked our socks off day and night.”

She said they took delivery of the first batch of 975 vaccines at 8.51am and aim to vaccinate 350 people a day, with the priority group being the over-80s.

There are five vaccination stations currently, which will double to 10 from Thursday when they are due a second batch of a further 975 vaccines.

Dr Thakur said: “We’re doubling the stations so we don’t waste a day, a minute.”

With the vaccination process officially due to start at midday, the GP said a socially-distanced queue had already formed well in advance, despite the rain.

She said: “Our patients were already here by 11.30am, raring to go.

“I was very, very pleasantly surprised at the number of patients that have arrived.”

She said it is “so important” that people take up the vaccine when contacted for an appointment.

Asked about safety concerns that some may people have, she said: “Our own staff have started to have it and as soon as my number gets called I am going to have it too.”

Harrow has more than 10,000 people aged 80 and over, Dr Thakur said, so people had to be prioritised on factors including whether they were physically able to make it to the centre and whether they had certain conditions such as diabetes or were from a BAME background, making them more vulnerable to the virus.

Daniel Martin, head of The Hive Foundation, said they wanted to do “everything that we possibly can” while unable to have fans as usual in the stadium due to coronavirus restrictions.

He said: “The one thing we do have is a lot of space, and we felt that it was a perfect fit certainly as we are centralised to our community.

“We’re a community club essentially, and we want to be able to effect change as much as we can.”