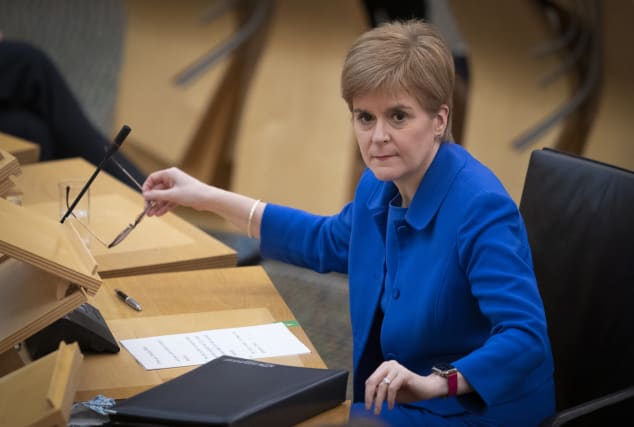 Nicola Sturgeon is considering if there should be any changes to planned restriction relaxations over Christmas after nine cases of the new coronavirus variant were confirmed in Scotland.

The First Minister said examination of whether “additional precautions” were necessary and she would provide an update following a call later with Cabinet Office Minister Michael Gove and the leaders of the devolved administrations.

She said she is not going into the call with a “fixed view” but that the discussion is necessary given the rise in cases and the new variant.

Under the current plans, eight people from three households will be able to mix indoors between December 23 and December 27.

Ms Sturgeon said: “I do think there is a case for us looking at whether we tighten the flexibilities that were given any further, both in terms of duration and numbers of people meeting.

“I will consider the views of the other nations, if we can come to a four-nations agreement I think that would be preferable, if that is not possible we will continue to consider within the Scottish Government what we think is appropriate.”

For now, she urged “utmost caution” regarding Christmas plans.

She said: “If you can avoid mixing with other households over Christmas, especially indoors, please do.

“If you feel it essential to do so – and we have tried to be pragmatic in recognising that some people will – then please reduce your unnecessary contacts as much as possible between now and then.”

She told MSPs the nine cases of the new variant, which has been linked to faster spread in parts of the UK, were all in the Greater Glasgow and Clyde health board area.

The First Minister said: “While the initial analysis of it suggests that it may be more transmissible, with a faster growth rate than existing variants, that is not yet certain.

“It may instead be the case that it has been identified in areas where the virus is already spreading more rapidly.”

Speaking at the weekly review of restriction levels at Holyrood, she announced East Lothian, Aberdeen City and Aberdeenshire councils will move from Level 2 to Level 3 on Friday after cases increased but there will be no changes in Scotland’s remaining 29 local authorities.

Edinburgh will remain in Level 3, Ms Sturgeon said, after cases in the past week have risen “sharply”.

The First Minister said it would be “deeply irresponsible” to move Edinburgh and Midlothian into Level 2 and has instead pledged to work with partners in the local area to encourage compliance with restrictions.

Notorious paramilitary killer Michael Stone has been released from prison