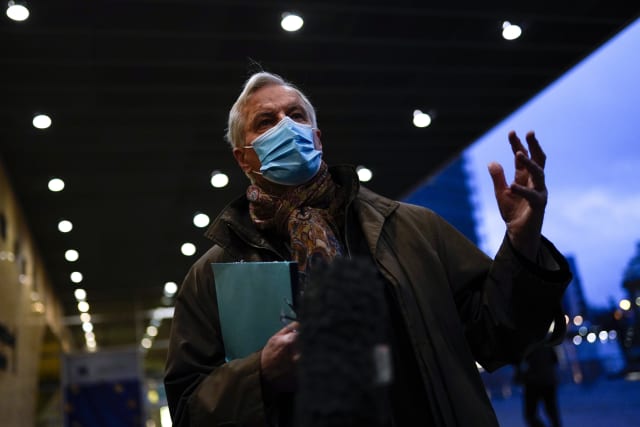 A trade deal between the UK and European Union is still possible, Brussels’ chief negotiator Michel Barnier has insisted.

Mr Barnier updated diplomats from the 27 EU states about the progress which has been made before resuming negotiations with his UK counterpart Lord Frost.

For months the talks have been deadlocked on the issues of fishing rights and the “level playing field” to ensure that neither side can unfairly compete with the other on environmental standards, workers’ rights or state subsidies.

Mr Barnier confirmed that those remained the main issues, telling reporters in Brussels “two conditions are not met yet” but “this deal, it is still possible”.

The other issue which has dogged the negotiations – the legal mechanisms to govern any deal – was not mentioned by Mr Barnier, suggesting those difficulties may have been resolved.

A spokesman for the grouping of EU ambassadors said there was “full support for the resilient and persistent” negotiating team led by Mr Barnier.

The UK’s current trading arrangements with the EU expire at the end of the month, meaning any new deal would have to be in place by January 1.

If not, tariffs and quotas will apply and bureaucracy will increase, causing further damage to an economy already ravaged by coronavirus.

Irish premier Micheal Martin said it will be difficult for the EU and UK negotiating teams to “square the circle” to reach a post-Brexit trade deal.

But the Taoiseach said both sides are aware of the “enormity and severity” of a no-deal Brexit on their respective economies.

The need for any deal to be approved by Parliament means that talks cannot continue right up until New Year’s Eve, but MPs are braced for the prospect of sitting over the festive period.

Business Secretary Alok Sharma told the BBC: “We have always said the transition period ends at the end of December and we will not be continuing discussions beyond that.

“Any deal that we have will then have to go through Parliament, so that would really be cutting it quite fine.”

But he added that Parliament “can move very quickly” to approve a deal if it had to.

Former chief whip Mark Harper, speaking to BBC Radio 4’s Westminster Hour, said: “Many of us are fully anticipating it’s entirely possible we might be returning to Parliament between Christmas and New Year to scrutinise this and vote it through if a deal is done.”

Sunday’s deadline for a decision on the future of the talks saw Mr Johnson and Mrs von der Leyen agree to “go the extra mile” in search of a solution.

Mr Johnson, speaking after the call, said the UK would not be walking away from the negotiating table and that “where there is life, there is hope”.

But he continued to warn that a no-deal outcome was still the most likely scenario.

He said the country should get ready for the breakdown of talks, resulting in tariffs under World Trade Organisation (WTO) terms from January 1 – a move that is predicted to cost jobs, cause food prices to rise and wipe £45 billion off the economy next year.

“The most likely thing now is, of course, that we have to get ready for WTO terms, Australia terms,” the Prime Minister said.

French MEP Nathalie Loiseau, an ally of president Emmanuel Macron, suggested that a no-deal scenario would simply lead to more talks in 2021.

Speaking on BBC Radio 4’s Today programme she said: “If there is any chance to reach a deal we will not let it go.

“There will be a deal one day between the United Kingdom and the European Union, there is no doubt about it.

“If mindsets are ready for a deal in London, well, let’s celebrate. If they are not, then we’ll talk again next year.”

Downing Street has repeatedly ruled out negotiations continuing in 2021.

Optimism around the continuation of the talks on Monday  was reflected in the currency markets.

“Sterling has rallied 1.2% to $1.3390 versus the US dollar as markets showed some relief that EU trade talks haven’t collapsed,’ says Russ Mould, investment director at AJ Bell.