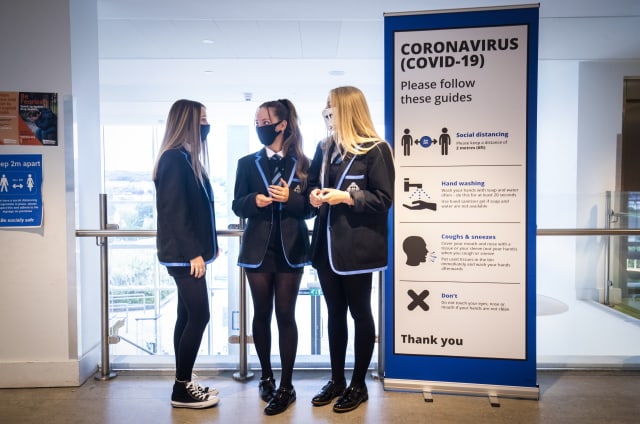 Sir Keir Starmer has urged leaders to keep schools open as the London mayor called on the Government to consider closing them early in the capital ahead of Christmas amid a surge in coronavirus cases.

Sadiq Khan wants all secondary schools and colleges in London to close a few days early and reopen later in the new year due to “significant outbreaks” among 10 to 19-year-olds.

The mayor is also calling for all schools in London  to be given priority testing from today and for extra resources to support online learning.

But Labour leader Sir Keir said he would urge Mr Khan to speak to the Government about what can be done to keep schools and colleges open.

It comes as schools in Greenwich have been asked to close and switch to remote learning from Monday evening due to rising coronavirus rates.

In a letter to parents, Greenwich Council leader Danny Thorpe said the east London borough was experiencing a period of “exponential growth” in Covid-19 cases, which required “immediate action”.

However, Sir Keir suggested bringing an extra inset day forward from the new year would be “smart” in order to close schools a day earlier than planned.

“But the worry about closing schools is all the parents have to decide what they do, that’s very difficult with short notice, and we know from previous experience that for children out of school it’s really difficult for the most vulnerable children,” he added.

But heads have been calling for more flexibility to end in-person teaching earlier to reduce the risk of pupils and staff having to isolate over Christmas.

Mr Khan said: “With significant outbreaks among 10 to 19-year-olds, the Government must consider asking schools and colleges to close early and reopen later in January, with extra resource provided to support online learning.”

In a letter to Boris Johnson on Sunday, he added: “All schools, sixth form and FE colleges, not just in the boroughs with higher levels of cases but across London, should be given priority testing tomorrow (Monday) and Tuesday.”