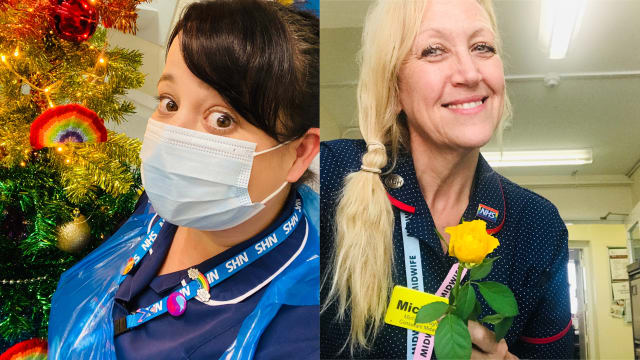 Britain’s biggest midwifery choir has launched a new charity Christmas single, with the aim of raising £500,000 — £1 for each baby born since the beginning of the pandemic.

More than 50 midwives have joined forces to create Caroll Of Hope, a Covid-themed cover of Somewhere Over The Rainbow, featuring Carroll Thompson, a British lovers rock singer.

The song celebrates the medical staff who have helped birth 500,000 babies across the UK since the first lockdown.

Money raised will go to charity Best Beginnings to launch a new version of its Baby Buddy app, an NHS-approved pregnancy and parenting app used by more than a quarter of a million parents across the UK.

During lockdown, the midwives formed a choir to support their own wellbeing and help celebrate the work of midwives everywhere.

Chief midwifery officer for NHS England, Professor Jacqueline Dunkley-Bent, said: “I, like many others, look forward to seeing the impact of the new Baby Buddy 2.0 and its contribution to supporting parents and their relationships with their midwives.”

Simon Austin, the musician who gave his time to work with the Midwifery Ambassadors to create the single, also became a father for the second time during the pandemic, and highlighted issues such as isolation and depression faced by many new parents.

“The collaboration that has gone into creating and releasing this Christmas single has been incredibly therapeutic,” he said.

“Having the app would have made such a difference to me in my darkest hours and it feels great to be able to pay forward.”

Thompson said: “It was pure joy to create this single with so many fantastic midwives from across the country.

“My mother was a senior midwife for many years, so I am aware of the importance of supporting and empowering all parents and the positive impact that Baby Buddy will create.

“I dedicate this song to midwives everywhere and to all the families now and in the future that will benefit from Best Beginnings’ powerful and empowering work.”