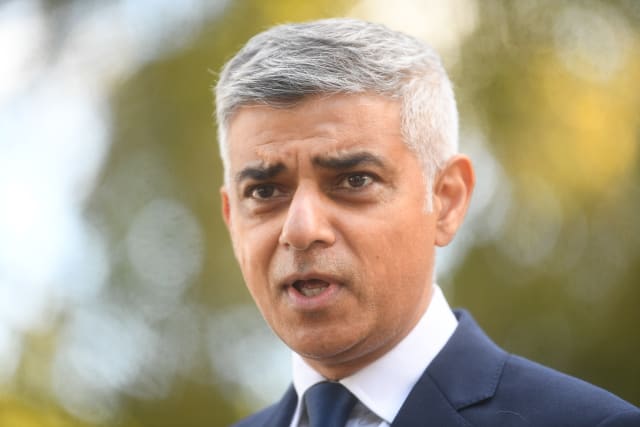 London faces being moved into the highest level of coronavirus restrictions, with a decision made as soon as today.

Tier 3 restrictions on the capital could have a catastrophic impact on the economy, with pubs and restaurants forced to close except for takeaway services over the busy Christmas period.

London Mayor Sadiq Khan has suggested that schools could be closed early for Christmas and reopen later in January in order to control the spread of the virus, with online lessons to replace missed classes.

He also called for mass testing in schools to help identify outbreaks.

Mr Khan said if the capital is moved from Tier 2 into Tier 3 the Government must provide extra support.

He said imposing the toughest tier across the capital would be a “blunt instrument”, arguing that the rise in cases was not linked to hospitality venues but instead due to a significant increase in schools and colleges.

Mr Khan said ministers could use a meeting on Monday to decide London’s status rather than wait for Wednesday’s review of the allocation of tiers across England.

The mayor told Sky News: “My understanding is that Covid-O is meeting as we speak – that’s the sub-committee of the Cabinet that makes the recommendations.

He said “it’s possible” that a decision will be made today “because we have seen over the last few days a big increase in the virus”.

“It’s worth them asking themself the question whether a move to Tier 3 is a blunt instrument that doesn’t really address in a laser-like fashion where we are seeing the biggest problems.”

Mr Khan has written to Boris Johnson setting out his concerns.

“I am calling on the Government to urgently provide additional support to get the spread under control, save lives and livelihoods and ensure our NHS is not overwhelmed this winter,” he said.

“Increased testing is key to this, which is why I want to see regular asymptomatic testing extended to all those unable to work from home and to students and staff at London’s secondary schools, sixth-form college and FE (further education) colleges.”

Mr Khan said there had been “significant” coronavirus outbreaks among 10 to 19-year-olds in the capital, and that Government must consider asking schools and colleges to close early ahead of Christmas and reopen later in January.

He said all schools and colleges across London should be given “priority testing” from today and Tuesday.

Schools in Greenwich, south-east London, have already been asked to move to online learning from Tuesday.

Mr Khan has also called for face coverings should also be made mandatory in busy outdoor public spaces given the increase in Christmas shoppers over the coming weeks.

In his letter to the Prime Minister, which was jointly signed by London Councils chair Georgia Gould, Mr Khan said the seven-day case rate had risen in 32 local authority areas in the capital compared to the previous week.

According to the latest figures, the borough of Havering has the highest coronavirus rate in London, with 1,314 new cases recorded in the seven days to December 9 – the equivalent of 506.3 cases per 100,000 people.

The figures have been calculated by the PA news agency, based on Public Health England data published on December 13 on the Government’s coronavirus dashboard.