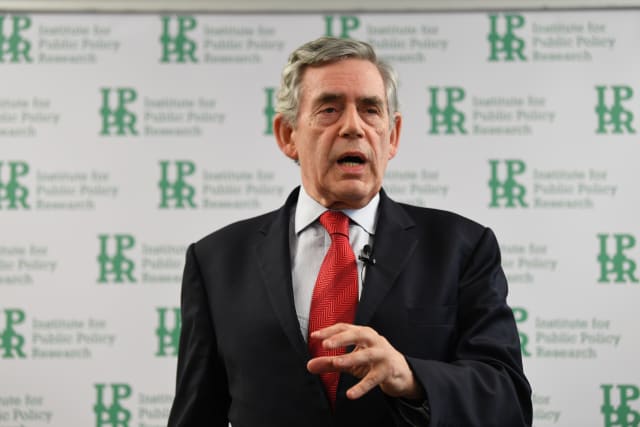 Former prime minister Gordon Brown has called on the Government to create a child friendly social security system after warning of worsening levels of poverty.

He said he did not expect “deepening, mind-destroying, humiliating, grinding poverty” to return in his lifetime, nor scar Britain so badly in the present day.

In a speech to the Child Poverty Action Group, he will say: “Never ending austerity – that’s what poor children, who have become the forgotten victims of the Covid crisis, will suffer as the 4.2 million children in poverty pre-Covid are subject to the lasting economic effects of the pandemic.

Mr Brown said that 100 children were helped at Christmas in 2011 in the Kirkcaldy family centre in the constituency where he grew up and represented in Parliament for 32 years.

This year, he says, it will be 1,500 children, helped with food and clothes.

“The arithmetic of deprivation must shock even the Cabinet – eight million households are in debt, six million are being pursued for payment of at least one household bill and two million are using food banks, with twice as many children dependent on them now than a year ago

“I cannot see how the Prime Minister and Chancellor can now justify subjecting six million families this Christmas to the anxiety and fear that their Universal Credit benefits will be cut by £1,040 a year in 12 weeks time.

“The way forward is clear – extend the £20 Universal Credit payment including to the six million who have it and to those still denied it like the self employed and the disabled currently on legacy benefits which is another 600,000 families.

“This month banks have been given their Christmas present from the Government, given permission to pay out dividends, but hungry children have been given no hope that in 2021 they will still have some of the help they receive today.

“To announce a change of heart on Universal Credit and children benefits would be the best Christmas present families could receive.”

A Government spokesman said: “We are committed to supporting the lowest-paid families through the pandemic and beyond. That’s why we have raised the living wage, boosted welfare support by billions of pounds and introduced the £170 million Covid Winter Grant Scheme to help children and families stay warm and well-fed during the coldest months.”