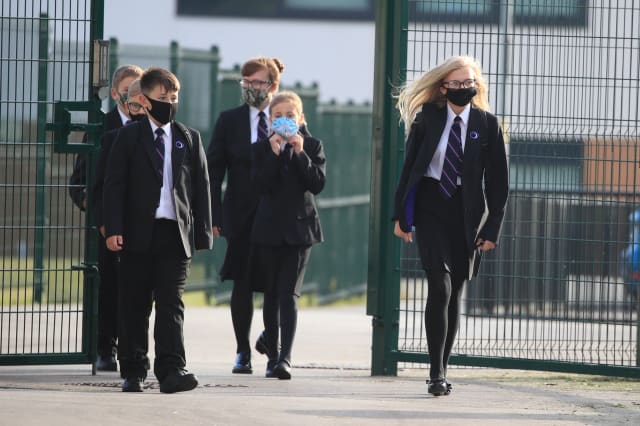 Schools in Islington have been asked to close and switch to online learning from Tuesday evening due to a rise in coronavirus cases across the capital.

It comes after schools in Greenwich, south-east London, were advised to close from Monday night and switch to remote learning amid rising Covid-19 rates.

London mayor Sadiq Khan has called on the Government to consider closing all secondary schools and colleges early in the capital ahead of Christmas.

But Labour leader Sir Keir Starmer has urged leaders to try to keep schools open during the final week of term.

Islington Council leader Richard Watts said there is a “serious and very worrying rise” in coronavirus across London.

He added: “We must all take action now to stop this deadly disease spreading serious illness and death to the people we love.

“Following public health advice, we are advising that schools close from the end of Tuesday and move to online learning, except for children of key workers and vulnerable children.”

Schools in Islington are also advised to remain closed after the Christmas break and continue online learning until January 11.

Cllr Watts added: “This is a very difficult decision – however the public health situation in Islington and London is so serious that we have to do everything we can to stop this deadly virus spreading in our community and across London.”

Mr Khan wants all secondary schools and colleges in London to close a few days early and reopen later in the new year due to “significant outbreaks” among 10 to 19-year-olds.

However, Sir Keir suggested that bringing an extra inset day forward from the new year would be “smart” in order to close schools a day earlier than planned.

“But the worry about closing schools is all the parents have to decide what they do, that’s very difficult with short notice, and we know from previous experience that for children out of school it’s really difficult for the most vulnerable children,” he added.

But heads have been calling for more flexibility to end in-person teaching earlier to reduce the risk of pupils and staff having to isolate over Christmas.

Schools have been warned they could face legal action if they allow pupils to learn remotely in the run-up to Christmas.

New powers introduced through the Coronavirus Act allow the Government to issue “directions” to heads around education provision during the pandemic.

But, should schools fail to comply with directions to remain open, Education Secretary Gavin Williamson could apply for a High Court injunction forcing them to do so.

Mr Courtney added: “We strongly welcome the decision by Greenwich Council to urge all of its schools to close from Monday evening, to all except vulnerable children and the children of key workers. We urge other councils to take the same decision.

“The Government should have been planning for this weeks ago. They have now started to recognise the blindingly obvious fact that transmission is happening in schools and that this can spread to families. Much more is needed to control the virus in schools and to protect communities.”

Asked about Sir Keir’s call for schools to stay open, Mr Khan told Sky News: “It’s very reluctantly that I’m saying to the Government they need to provide urgent guidance on our schools, because some schools aren’t Covid safe.

“When you speak to the children, the parents, the teachers, the staff, they all tell you their concern about their establishments – whether it’s a school or an FE college – being a place where the virus is accelerating.”

Geoff Barton, general secretary of the Association of School and College Leaders (ASCL), said: “It is deeply unfair on school leaders, teachers, families and pupils that they are caught between the heavy-handed approach of central government and increasing alarm at local infection rates.”

He added: “Although it is now incredibly late in the day, the Government must remove the threat of legal action and allow schools to make the decisions they need to make on behalf of their staff and children.

“In the future, it must allow for more nuanced responses to local infection rates and the huge disruption affecting many schools rather than insisting on a one-size-fits-all approach.”