Broken Isle of Wight monolith on sale on eBay 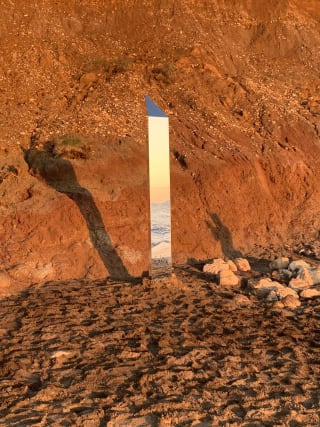 A monolith that appeared on the Isle of Wight has been put on sale on eBay after being removed from the beach.

Bids on the mirrored pillar had reached £5,400 by Monday evening with seven days left on the auction.

Designer Tom Dunford, who created the sculpture, said he was disappointed that someone had decided to “cash in” rather than sell it for charity.

He told the BBC: ”It could have been used to raise some money for charity in an auction – that would have been the right thing to do.”

A spokeswoman for the National Trust, which owns Compton Beach where the monolith was discovered, said it had been found “fallen and broken up” and a member of the public had offered to take it away.

She said a cash donation had been made but this would be returned as the charity decided it was not appropriate.

She said: “The monolith was installed on Compton Beach but had fallen and broken up.

“A beach cleaner moved the damaged mirror panels to the car park and our ranger arrived to collect the fragments for disposal.

“Whilst there, the ranger was approached by an individual who asked if he could have the remains for his garden, so they were left for him to take away.

“A few minutes later, the individual handed over a cash donation, but the National Trust is returning this.

“Our intention was to keep the beach and car park clear of debris. We do not claim ownership of the monolith and do not want a donation to confuse that.”

The Isle of Wight monolith was one of several that have appeared around the world following the first which was found in Utah, USA.

Others have been found in the UK including Throwleigh, Devon, and Glastonbury, Somerset.

The eBay seller has been approached for comment by the PA news agency.