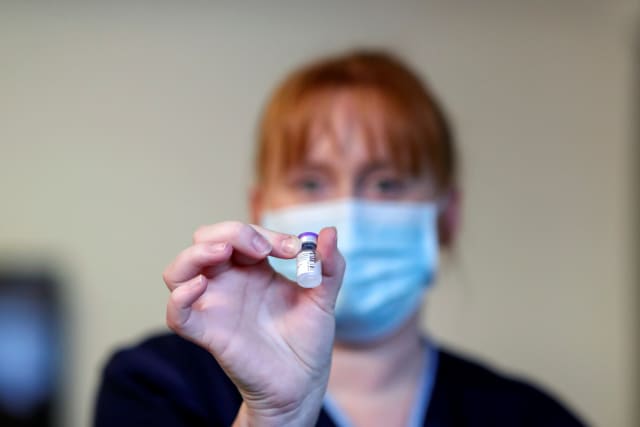 The Covid-19 vaccination rollout enters a new phase this week as centres run by local doctors begin opening across England.

Here we look at what the plan is for the biggest immunisation programme in the history of the NHS and what happens next.

Practices in more than 100 locations were having the vaccine delivered on Monday. Some are opening their clinics straight away while the majority begin providing vaccination services to their local communities from Tuesday.

Who will they be giving the jab to?

NHS staff including nurses and pharmacists will work alongside GPs to inoculate those aged 80 and over, as well as care home workers and residents.

The vaccination centres will operate from existing doctors’ surgeries or community hubs, with patients invited to receive the jab.

The latest phase of the vaccine rollout is being co-ordinated by GP-led primary care networks, with more practices and pharmacies due to join on a phased basis over the coming months.

What about vaccinations in care homes?

Care home residents in England will receive their first Covid-19 vaccine later this week after the distribution process was finalised to ensure safe delivery of the Pfizer and BioNTech jab.

In Scotland some care home residents were receiving the Pfizer coronavirus vaccine on Monday after more than 5,000 NHS staff and vaccinators received the jab when the rollout started last week.

The care home move came after the Scottish Government said a solution had been agreed which allowed the Pfizer vaccine, which must be stored at minus 70C, to be transported from storage hubs to homes.

To get it to the homes, the vaccine is being “packed down” into smaller batches which can then be taken to homes with “minimal wastage”.

Health Secretary Jeane Freeman described it as “another step on the road to our collective recovery”.

How about Northern Ireland?

The rollout of the Pfizer/BioNTech jab started last week with vaccinators and care home residents and staff the first to receive it.

Centenarian Ethel Sinclair was among the first recipients after medics visited Bradley Manor, a care home in Belfast.

The rollout began last week in Wales with hundreds of NHS and social care staff first in line for the jab.

Seven vaccine centres have been set up across the country with the first wave of the rollout due to see nearly 20,000 people immunised.

When did the Pfizer/BioNTech vaccines arrive?

The first batch of vaccine vials arrived from Belgium where they are manufactured on December 3.

There were 800,000 doses in the first tranche, meaning 400,000 people will be vaccinated initially as two jabs are required.

How are appointments being arranged?

NHS staff have been identifying people in key target groups and lists have been passed to appointment bookers who have been making phone calls to arrange appointments.

Some hospitals have also been focusing on people who are due to come in for an outpatient appointment, or those who are currently receiving care in hospital.

What will the appointment involve?

When a patient arrives they will be registered and the vaccine will be administered.

A computer system will issue an email or letter to the patient and their GP saying they have had the vaccine and confirming a follow-up date three weeks later when they will get the second dose.

The jab is typically delivered by an injection in the shoulder.

Should everyone aged 80 and over expect a phone call soon?

No. Even vaccinating people in key target groups is a mammoth undertaking and health officials have said the vast majority will not get the jab until early 2021.

What are the key target groups?

The top two are care home residents and their carers plus the over 80s and frontline health and social care workers.

That’s a lot. Will there be enough jabs?

The UK government says it has access to a total of 357 million doses from seven different developers so if they all get approved for use – then there should be more than enough to go round.