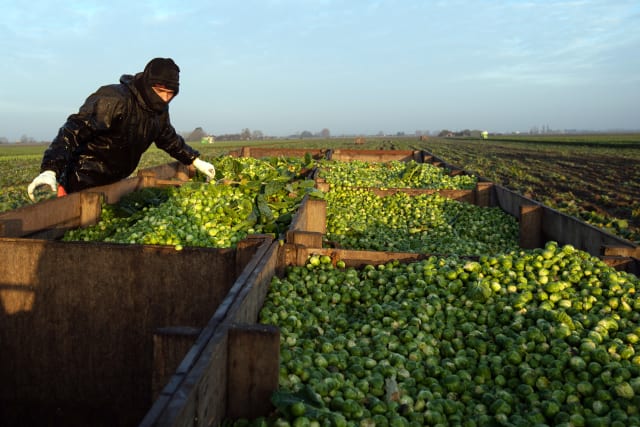 Brussels sprouts will be up to 50% larger than usual this year due to the warm summer, a grower has said.

Lincolnshire-based TH Clements, one of the UK's biggest growers of brassica, has reported that sprout yield is up by 20% on 2019 and that they will be whoppers – up to 50% bigger than usual.

It follows a warm spring and summer which has helped growth of the buttons – the part of the plant which is eaten.

Richard Mowbray of TH Clements, based in Benington, near Boston, said: "The year so far for sprout production has been very good and we're getting colder weather now just at the right time.

"During the last few weeks we have had some windy days which helps to blow the old leaves off the plants and is again good for helping the buttons to remain blemish free.

"If the weather stays like this then this will be the best Christmas for sprout quality in at least five years."

Tesco, which is supplied by TH Clements, has reported a near 20% rise in sprout sales this year compared with 2019.

The supermarket giant's sprout expert Rob Hooper said that ideal weather from May onwards has led to a great crop.

"This year the UK will get some of the best quality sprouts we've seen for at least five years and great news for cooks is that the larger size will mean that they will be easier to peel," he said.

"Nobody likes the chore of peeling sprouts but this year, because of their size, customers will need fewer of them on their Christmas dinner plates and that means less work in the kitchen.

"Most of the UK sprouts for the winter season are planted in May and this year we not only had the warmest spring on record but a good summer with the right amounts of rain for fruit and vegetables.

"The early life of the crop from planting through until the early autumn, is important to the ultimate quality of the sprouts in producing strong tall stalks ready for producing the buttons – the bits of the sprouts which are eaten."

Growing conditions this year have produced stalks of sprouts taller than growers have seen in recent years.

It has also allowed buttons to form with a good amount of space between each one – important from a quality point of view as it allows air flow which helps them to stay blemish free.