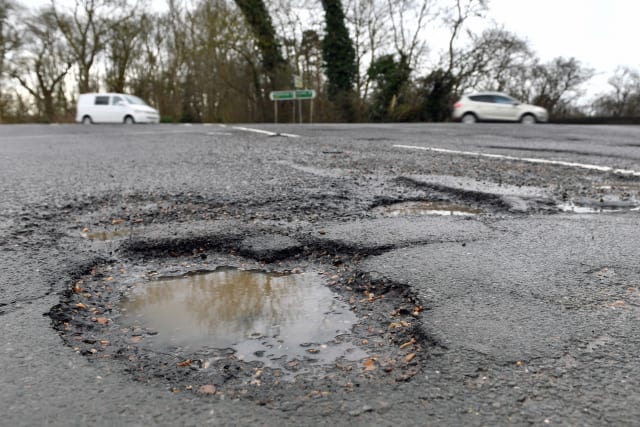 An RAC poll of 3,068 drivers indicated that 38% are agitated by the condition and maintenance of local roads.

This is up from 33% in 2019 and is ahead of other issues such as motorists using handheld phones (32%), the standard of other people’s driving (27%), and the aggressive behaviour of other road users (26%).

Potholes are the number one complaint in relation to the state of local roads, but other issues include visibility of signage, roadside litter and maintenance of verges and foliage.

Only 6% of drivers think conditions have improved.

Motorists based in rural areas are more likely to say local roads have worsened (59%).

Separate RAC data shows it received 1,871 call-outs for pothole-related vehicle damage between July and September, which is the highest number for those three months since 2015.

RAC head of roads policy Nicholas Lyes said the figures are “a big concern” as last year’s relatively mild winter was not expected to have led to a further decline in road surface quality.

“Faced with the early stages of the pandemic, local authorities might not have been able to keep up their planned maintenance programmes, possibly due to staffing issues, and local roads suffered as a consequence,” he said.

“This also calls into question just how much progress has actually been made in fixing the 11 million nuisance potholes cited by Transport Secretary Grant Shapps in May.

“On the flipside, with less traffic, there was perhaps a far better opportunity for councils to fix the roads than in previous years, so we were pleased to see that several local authorities did just that.”

A Department for Transport spokeswoman said: “We know that people want to see potholes repaired and roads improved, which is why we’ve committed £2.5 billion for local road repairs as part of the biggest nationwide pothole programme ever announced.

“During lockdown earlier this year, quieter roads enabled local authorities to carry out more highway maintenance works, leading to over 319 miles of resurfacing.”

David Renard, the Local Government Association’s transport spokesman, said fixing roads was “a top priority” for councils but they were deteriorating faster than they could be repaired.

“Despite the pandemic, councils have been working hard to fix potholes and repair road surfaces as well as supporting the increase in cycling infrastructure through temporary road measures,” he said.

“Extra government funding has helped but our local roads are deteriorating at a faster rate than can be repaired by councils.

“With devolved infrastructure and transport budgets and long-term funding, councils can improve our roads and deliver the infrastructure improvements that allow people to move around in less carbon intensive and more sustainable ways.”