John le Carre: The writer who opened a window on the secret world 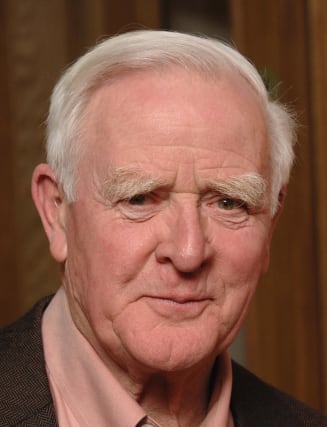 He brought the world of espionage – with all its secrecy, betrayal and treachery – into parallel with society, writing with the authority of a man who had lived and worked in the intelligence sphere.

His accuracy in research and technique relied on what was undoubtedly his greatest gift – that of a born storyteller.

Born as David Cornwell in Dorset in 1931, the Cold War author was brought up in a turmoil of insecurities.

His mother left the family home when he was just six and he and his brother were brought up by their grandparents in Poole, while his father, Ronnie Cornwell, was set on making money by fair means or foul.

Through his father’s dubious income, the novelist studied at Sherborne School before leaving aged 16 to attend the University of Berne to study German literature.

Cornwell went on to serve in the army in Austria before returning to England and attending Lincoln College at the University of Oxford, where he gained a first in modern languages.

After leaving university, he taught at the prestigious boarding school Eton for a spell before joining MI5.

He began writing while working for the secret service, inspired to a large extent by fellow writer John Bingham, who was the basis for Cornwell’s most enduring character George Smiley.

In 1960, he was sent to work undercover at the British embassy in Bonn, where he worked in the intelligence records department with access to files that gave him insights into the workings of the secret service.

Cornwell was unable to write under his own name, according to Foreign Office rules, and so he used the name John le Carre – although his reasons for choosing that name remained a mystery.

His first novel Call For The Dead, which saw the first appearance of Smiley, was published in 1961, while A Murder Of Quality was published the following year.

His real breakthrough came in 1963 with The Spy Who Came In From The Cold, which told the story of Alec Leamas, an aging British intelligence agent forced to carry out one last operation in Berlin.

Writing in the Guardian on the novel’s 50th anniversary, Cornwell said: “I wrote The Spy Who Came In From The Cold at the age of 30 under intense, unshared, personal stress, and in extreme privacy.

“As an intelligence officer in the guise of a junior diplomat at the British Embassy in Bonn, I was a secret to my colleagues, and much of the time to myself.”

Like many of Cornwell’s later works, the book was adapted into a film of the same name in 1965, which was a box-office success.

Cornwell said his manuscript was approved by the secret service because they “rightly if reluctantly” concluded it was “sheer fiction from start to finish” and posed no security risk.

But he said the world’s press took a different view, deciding the book was “not merely authentic but some kind of revelatory Message From The Other Side”.

He left the service to pursue a full time career as an author and in 1971 tried a brief foray into romantic writing with The Naive and Sentimental Lover, based on the end of his marriage to Alison Sharp.

The following year he married Jane Eustace, with whom he had one son Nicholas, a novelist who writes as Nick Harkaway.

Cornwell found the real value of his anti-hero figure Smiley when he started writing the trilogy of Tinker, Tailor, Soldier, Spy, The Honourable Schoolboy and Smiley’s People.

He made a cameo as a drunk secret agent in the 2011 film version of Tinker, Tailor, Soldier, Spy, which starred Gary Oldman as Smiley – the part made famous by Alec Guinness in the TV series.

In 1986, he wrote The Perfect Spy, which many regarded as Cornwell’s way of putting to rest old ghosts because of the strong parallels with his own life.

The story was about a master spy Magnus Pym who writes a novel about his father, a con-man and fraudster, in order to sort out the questions in his own life.

Throughout his life, he was undeniably patriotic but showed disdain for the British establishment, turning down literary honours and a CBE.

In 2003, Cornwell penned an essay which was published in the Times called The United States of America Has Gone Mad, which criticised the invasion of Iraq.

Asked if he considered himself an Englishman in a 2017 US interview, he said: “Yes of course I’m born and bred English, I’m English to the core.

“My England would be the one that recognises its place in the EU. The jingoistic England that is trying to march us out of the EU, that is an England I don’t want to know.”

The author died aged 89 after a battle with pneumonia and is survived by his wife Jane and his sons Nicholas, Timothy, Stephen and Simon.