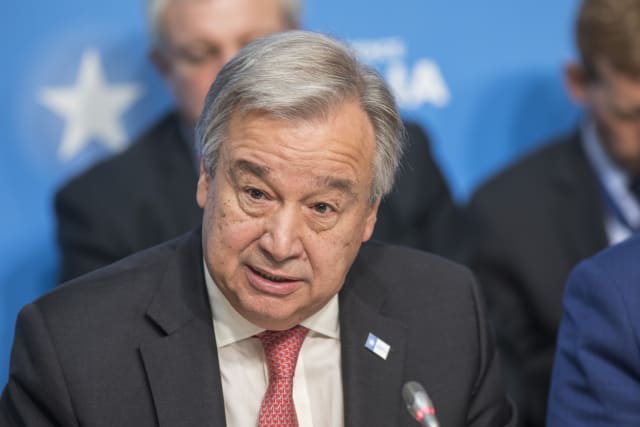 The virtual climate ambition summit aimed to keep pressure on countries to set out carbon reduction plans, after planned UN Cop26 climate talks were postponed due to the pandemic.

As the summit kicked off, UN secretary general Antonio Guterres urged leaders to declare climate emergencies in all countries until emissions were reduced to zero overall, starting with meaningful cuts now.

The event marked the fifth anniversary of the global Paris Agreement, which commits countries to limiting temperature rises to 2C or a more stringent goal of 1.5C above pre-industrial levels, to avoid dangerous climate impacts.

But with policies and pledges so far putting the world on track for a more than 3C rise, Mr Guterres said: “I urge everyone to show ambition, stop the assault on our planet – and do what we need to guarantee the future of our children and grandchildren.”

Among the countries taking part in the event, 45 put forward plans to ratchet up short-term goals to reduce greenhouse gases by 2030.

A further 24 outlined new commitments to cut emissions to “net zero” in coming decades, which is needed to stabilise the climate at a safe level.

Campaigners welcomed moves by major economies such as China and the EU to increase their ambition on climate change.

But they warned much more needed to be done to curb global warming to 1.5C, the threshold beyond which worse impacts of severe weather, rising sea levels, falling crop yields and wildlife losses will be felt.

The US federal government was not represented as President Trump pulled the country out of the Paris Agreement, the world’s first comprehensive treaty on climate change.

But during the summit, president-elect Joe Biden confirmed on Twitter his pledge to re-enter the accord on his first day in office.

“We’re going to rally the world to push our progress further and faster and tackle the climate crisis head-on,” he tweeted.

Following China’s recent pledge to reach net zero carbon emissions by 2060, President Xi Jinping used his address to set out steps the country would take in the next 10 years.

China would lower carbon emissions by 65% per unit of GDP from 2005 levels by 2030, increase renewables to 25% of its energy mix, with wind and solar making up a massive 1,200 gigawatts of power, and boost forests, he said.

Canada’s premier Justin Trudeau said the country had raised its ambition to reduce emissions, saying it would “strive for the upper end of a range of 32% to 40% below 2005 levels by 2030,” up from 30% previously.

Businesses including Apple have made net zero commitments, while UN climate, environment and development bodies set out the threats to the world from rising temperatures.

Ahead of the summit, the UK unveiled plans to cut emissions by at least 68% on 1990 levels by 2030, and end fossil fuel funding abroad, while the EU has agreed to reduce greenhouse gases by at least 55% over the same period.

Boris Johnson, co-hosting the event, warned climate change was far more destructive than Covid-19 which has gripped the world this year, but said there was now a surge of scientific optimism, as vaccines started to be rolled out.

A green recovery from Covid-19 could create thousands of jobs, he said, and the world could radically cut dependence on fossil fuels, change agricultural practices and reverse the processes “by which for centuries humanity has been quilting our planet in a toxic tea cosy of greenhouse gases”.

Closing the summit, Business Secretary and Cop26 president Alok Sharma said real progress had been made, but it was not yet enough to put the world on track to limit warming to 1.5C.

He called for increased ambition and action leading up to the UN talks in Glasgow next November.

“The choices we make in the year ahead will determine whether we unleash a tidal wave of climate catastrophe on generations to come. But the power to hold back that wave rests entirely with us,” he said.

Tanya Steele, chief executive of WWF-UK, said key players including China, the EU and the UK had set out action and ambition for the future.

“Now we need these new promises translated into swift, clear and measurable action to keep temperature rise to 1.5C avoiding the most dangerous climate change.”

But Tim Gore, head of climate policy at aid agency Oxfam, said the summit lacked “real ambition” and leaders must step up in the next 12 months to pull the world back from the brink of catastrophic climate change.

“We must not stumble from Covid-19 disaster into climate calamity,” he warned.