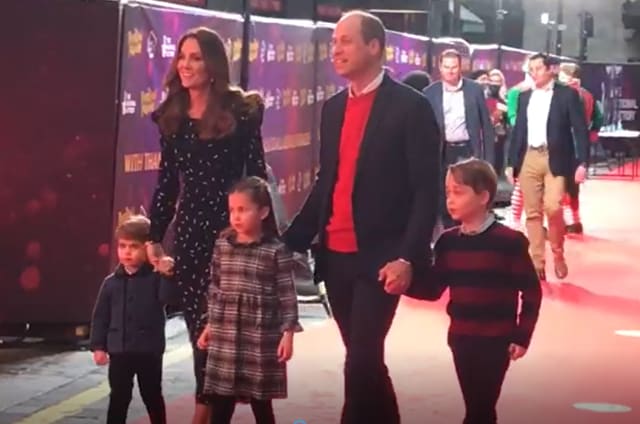 The Duke of Cambridge has paid tribute to Dame Barbara Windsor, describing her as a “giant of the entertainment world” as he took his family to see a panto.

In a rare public outing, an excited Price George, Princess Charlotte and Prince Louis watched a performance of Pantoland – staring Julian Clary, Elaine Paige and a host of stars – with parents William and Kate in the royal box.

The special show was staged at the London Palladium to thank key workers from across the capital and their families for their efforts during the pandemic.

It was the Cambridges’ first red carpet engagement as a family of five.

The children, who appeared apprehensive when they arrived, relaxed and looked on with glee as they took their seats and saw their father making a speech before the performance.

William told the audience: “Before I go on, I want to pause and pay tribute to a true national treasure, Dame Barbara Windsor, who so sadly passed away last night.

“She was a giant of the entertainment world, and of course a legend on pantomime stages across the country, including here at the London Palladium.

“And I know we’ll all miss her hugely.”

Earlier this week the duke and duchess travelled 1,250 miles around the country, during a three-day tour on the royal train, to thank frontline and key workers, communities and individuals for their efforts during the pandemic.

William added: “We are here tonight for a very special performance. Special, because of you – the key workers here in the audience.

“You include community workers, volunteers, teachers, NHS staff, representatives from the emergency services and military, researchers working on the vaccine, people helping the homeless, those manning vital call centres, and staff from a wide range of frontline charities – to name but a few.

“You have given your absolute all this year, and made remarkable sacrifices.”

When William returned to the box, there was a swift shuffling of seats, as the duke sat between his eldest son and daughter, leaving Charlotte briefly holding her face in her hand for some reason, as Louis sat on Kate’s lap.

Guests were encouraged to wear a Christmas jumper and while Kate wore a dress by Alessandra Rich, William had on a festive red pullover.

The young royals were photographed meeting Sir David Attenborough at their Kensington Palace home in September, when he came to watch his new film with their father.

And the children also went to see Kate’s garden at the Chelsea Flower Show last year.