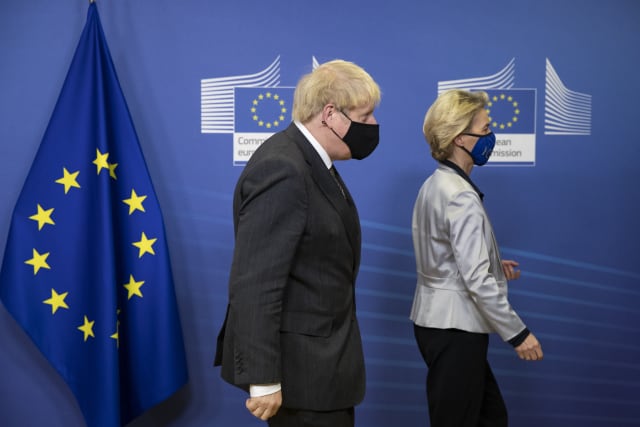 The UK and European Union remain apart on “fundamental issues” in post-Brexit trade deal negotiations, Brussels’ top official has warned, ahead of Sunday’s deadline for a decision on the future of the talks.

But she said the UK would be “free” to decide whether to follow suit each time the EU changes its regulations, though if it refused, the bloc would adapt the conditions for access to its markets.

Her comments came after Prime Minister Boris Johnson warned there is a “strong possibility” the UK will fail to broker a trade agreement and told the nation to prepare for no-deal at the end of the transition period this month.

Speaking at a press conference at the end of a two-day European Council summit in Brussels, Mrs von der Leyen said: “I briefed the leaders on the negotiations with the United Kingdom: positions remain apart on fundamental issues.

“On the level-playing field, we have repeatedly made clear to our UK partners that the principle of fair competition is a pre-condition to privileged access to the EU market.

“It is the largest single market in the world and it is only fair that competitors to our own enterprises face the same conditions on our own market.

“But, this is not to say that we would require the UK to follow us every time we decide to raise our level of ambition, for example in the environmental field.

“They would remain free, sovereign if you wish, to decide what they want to do. We would simply adapt the conditions for access to our market according to the decision of the United Kingdom, and this would apply vice versa.”

On fisheries, Mrs von der Leyen said the UK and EU have “not yet found the solutions to bridge our differences” and urged the Government to “understand the legitimate expectations of EU fishing fleets built on decades, and sometimes centuries, of access”.

“On these and other points, our negotiators are working. We will decide on Sunday whether we have the conditions for an agreement or not.”

And she added: “One way or the other, in less than three weeks it will be new beginnings for old friends.”