One in three exposed to coronavirus anti-vax messages, study suggests 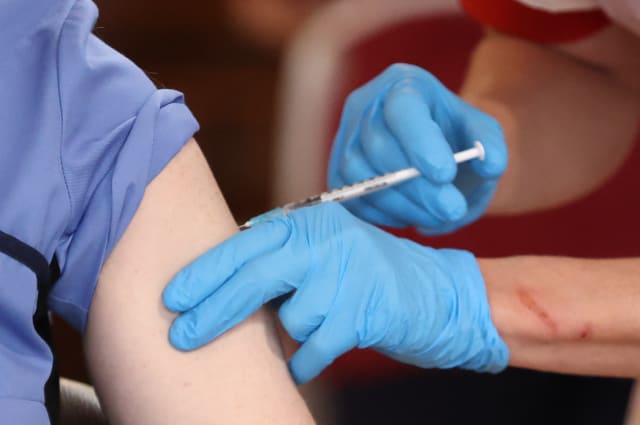 Conspiracy theories discouraging people from getting a coronavirus vaccine have been seen or heard by more than a third of people in the UK, a new study suggests.

It comes in the week where the UK began vaccinating the first people in the world against Covid-19, outside of trials.

The report also found that around 40% of people who get their information from platforms such as WhatsApp or YouTube believe conspiracy theories about the Covid-19 vaccines, with belief in such theories higher among young people who consume a lot of information from social media.

The research also warned that those who use social media more, were more likely to believe a wider range of conspiracies.

It found that around 15% of those surveyed said they believe that a coronavirus vaccine is being developed only to make money for pharmaceutical companies, but this then rose to 39% among those who get a lot of information from WhatsApp and 37% among those who do the same with YouTube.

Professor Bobby Duffy, director of the Policy Institute at King’s College London, said the findings showed it was vital that more work was done with social media platforms to eradicate such misinformation.

“One in three people say they’ve seen or heard messages discouraging people from getting vaccinated against Covid-19, with social media being the prime source. And it’s clear that some harmful views have taken hold among a minority of the public,” he said.

“They range from concerns about whether the UK Government will ensure the safety of the coronavirus vaccine, to particularly extreme conspiracy theories, such as that the real purpose of the vaccination effort is to track and control the population – which is believed by one in seven, and greater proportions of young people and social media users.

“Working with social media platforms to control the spread of misinformation is therefore an important action – but the main focus should not be on this niche belief in extreme conspiracies. People who believe in these theories still form a small minority, and many of them will be very difficult to convince.

“Instead, we need to focus on the much larger sections of the public who say they’re unsure about the truth of some of the medical implications of vaccination – such as the 42% who say they don’t know if it may cause autism in children and the 48% who are unsure whether it might cause infertility.

“As we start on the very long process of vaccinating as much of the population as possible, addressing this uncertainty through transparent, consistent and inventive public health communication will be essential.”

Social media platforms have been repeatedly criticised for their handling of misinformation and harmful content, and stricter regulation is expected to be introduced in 2021 through the Government’s Online Harms Bill.

The Bill is expected to introduce a statutory duty of care for online firms, with large fines for those who fail to protect their users from such content.

Kelly Beaver, managing director of Ipsos Mori public affairs, said: “The proliferation of anti-vax material that is being seen by people on social media – particularly young people – and its impact on their views is incredibly concerning in the week where we’ve seen the UK vaccinate the first person outside of a trial in the world.

“The public are obviously concerned about this, as we see in their high levels of support for regulation of social media platforms, including fines for companies who fail to remove false information. Vaccines have been one of the greatest medical interventions over the last two centuries. We cannot afford to take a backwards step.”

Gavin Williamson on this year's exams