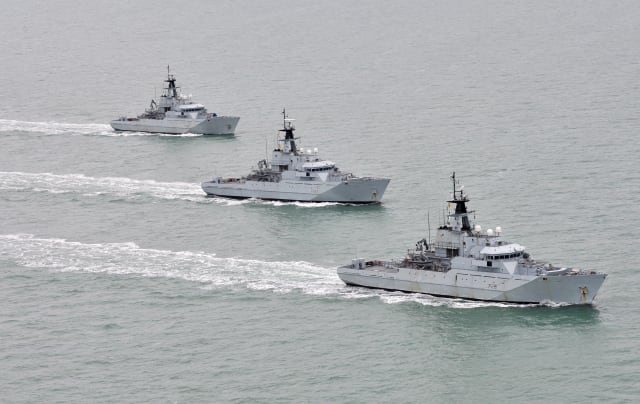 Four Royal Navy boats are on standby to patrol UK fishing waters in the event of a no-deal Brexit.

The 80-metre vessels would guard British waters from EU trawlers in the event that there is no new agreement on fishing rights after December 31 when transitional arrangements end.

The confirmation of the move by the Ministry of Defence comes as Boris Johnson and European Commission president Ursula von der Leyen warned on both sides of the Channel that a no-deal outcome looked more likely than an agreement in the trade negotiations.

On Friday afternoon Mr Johnson met with senior minister Michael Gove, whose has responsibility for Brexit planning, and other officials to “take stock” of Government plans for a no-deal exit.

Fishing has been one of the most contentious issues in the negotiations with the bloc, with France reportedly discontent with the UK’s proposals for reducing quotas for EU skippers.

A spokesman for the MoD said: “The MoD has conducted extensive planning and preparation to ensure that defence is ready for a range of scenarios at the end of the transition period.

“This preparation includes a standby package of 14,000 personnel to ensure that we are ready to support other Government departments and authorities over the winter period, including with the EU transition, Covid-19 and potential severe weather events.”