Brexit could cut volume of goods shipped to Ireland by retailers, hauliers warn 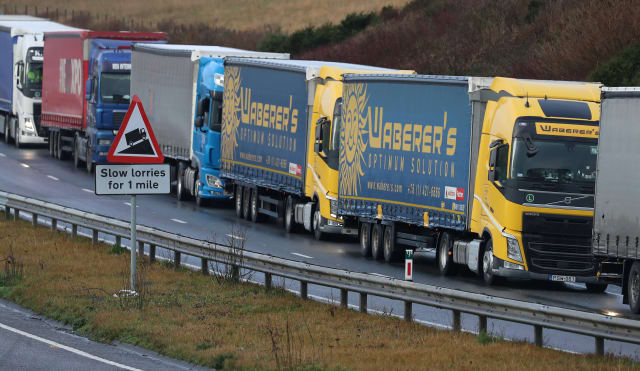 Large retailers could cut back on shipping to Ireland if checks created by Brexit cause delays, hauliers have warned.

Martin Reid, the Road Haulage Association’s (RHA) director for Scotland and Northern Ireland, said it is “crazy” that industries are still in the dark about the nature of customs checks.

He said the situation at the port of Cairnryan in Dumfries and Galloway, where many goods are transferred between Scotland and Northern Ireland, is unclear whether or not a Brexit deal is struck.

Shellfish caught in the Highlands may even have to be dumped if it cannot get to a crucial market in France on time, he said.

Discussing Cairnryan, Mr Reid said: “Although we got some announcements on the Northern Ireland protocol last night, the minutia and the detail are still to be decided, there’s still more to come.

“On one hand we’ve heard that some major retailers will scale back movements to Ireland.

“We’ve heard of one in particular who may not go near it for the first three months of the year.

“We’ve also heard contrary stories that it could increase the volume.”

The Scottish Government is working on contingency plans in case lorries had to “stack” at Cairnryan, he said.

Mr Reid added: “As an industry we’re looking to plan ahead but there’s so many unknowns it becomes difficult.”

It is still unclear exactly how lorries travelling from Scotland to Ireland via Northern Ireland will be checked, the RHA director said.

He welcomed a recent announcement there will be a six-month grace period before hauliers are required to have an international travel permit to move goods across countries.

But regardless of whether there is a deal or a no-deal, Mr Reid said the nature of the customs process is still unclear.

“We don’t know any of these things and quite frankly it’s crazy that at a time when all the fine-tuning should be taking place some of the fundamentals are still not ready.”

Much of Scotland’s trade with the continent is high-value or time-sensitive goods like shellfish, he said, which drops in value sharply if they miss their prime market.

A large hub at Boulogne-sur-Mer in France is an important stop for seafood distribution around Europe.

Mr Reid said loads that miss the deadline for this prime market either have to go to wholesalers for a “massive drop” in value or in “extreme cases” be dumped with no revenue at all.