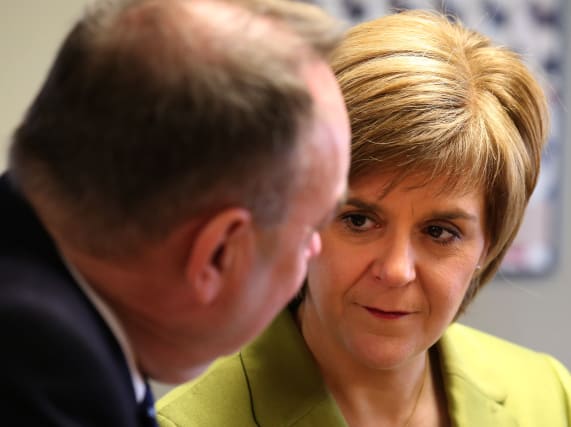 Scotland’s First Minister has said “wild conspiracy theories” about what led to the botched investigation into harassment allegations against her predecessor Alex Salmond are damaging the inquiry set up to scrutinise it.

Nicola Sturgeon has been criticised after her husband and SNP chief executive Peter Murrell appeared to contradict her previous evidence before the Committee on the Scottish Government Handling of Harassment Complaints.

The First Minister said in a letter to the committee she believes a meeting with Mr Salmond when she was told about harassment complaints being made against him would be a party issue, meaning it did not need to be recorded in line with the ministerial code.

Mr Murrell told the committee on Tuesday, under oath, that he believes the meeting was on government business.

Ms Sturgeon, who told MSPs she will appear before the inquiry “in a few weeks”, was pushed on the matter by the Scottish Conservatives’ Holyrood leader Ruth Davidson on Thursday.

She accused the First Minister of believing the public’s “heads button up at the back”.

Ms Sturgeon responded that she did not share the contents of the meeting in their home with her husband, adding she is “not the office gossip”.

“This is an inquiry into an investigation of sexual harassment and that is why we should all treat it seriously but those who choose to indulge in wild conspiracy theories make it less likely rather than more likely that we learn the lessons of that,” she said.

The First Minister said her husband has “no role” in matters relating to the Scottish Government and it was for her, as the leader of the government, to answer questions about its conduct.

She added the Tory MSP was seeking to use “my husband as a weapon against me”.

She said: “Here’s what we’re being asked to believe here – that the chief executive of the SNP popped his head round the door to find the First Minister of Scotland, coincidentally his wife, her predecessor Alex Salmond, his chief of staff, her chief of staff and Mr Salmond’s lawyer, all sitting unannounced in his living room.

“And he never asks a single question, then or since, of what that’s all about.”

When asked if she expects her evidence to be believed, Ms Sturgeon said: “Yes, because that happens to be the truth.

Meanwhile, former SNP Westminster leader Angus Robertson has said he was told of allegations against Mr Salmond 11 years ago.

In a letter to the committee, Mr Robertson, who is seeking a seat in the Scottish Parliament next year, said he was contacted by a manager at Edinburgh Airport in 2009 who claimed a member of staff had made a complaint about Mr Salmond.

The former Moray MP wrote: “In 2009, I was called by an Edinburgh Airport manager about Alex Salmond’s perceived ‘inappropriateness’ towards female staff at the airport.

“I raised the matter directly with Mr Salmond, who denied he had acted inappropriately in any way.”

No complaint was made about the matter.

Mr Salmond successfully challenged the Scottish Government’s investigation of sexual harassment claims against him and was awarded £512,250 after the Court of Session said it was unlawful and “tainted with apparent bias”.