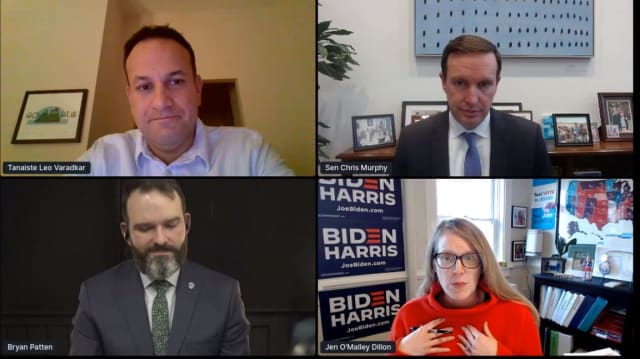 Irish politics is becoming more polarised with social media facilitating one side of a story becoming “accepted fact within hours”, the Tanaiste has said.

Leo Varadkar said he was concerned at how the wearing of masks became a political issue in the United States, with a poll suggesting supporters of some parties in Ireland are more likely to take the coronavirus vaccine than others.

He was speaking at a virtual event organised by the Washington Ireland Programme, along with US senator Chris Murphy and Jen O’Malley Dillon, campaign manager for President-elect Joe Biden.

Ms O’Malley referred to a “void” in the conversation in the United States where many engage only with arguments they agree with, and many still will not call Mr Biden the President-elect following the election.

“We have so much work to do, and it’s going to take all of us. We can’t solve from one side to bring the country back together to heal from the crisis of the pandemic and the crisis of the polarisation of our politics,” she said.

Mr Varadkar said he was concerned that Irish politics is going the same way.

“Social media is a big part of that. The wrong end of the stick, an inaccurate story, one side of the story can become accepted fact and truth within hours, because things aren’t mediated by the media, they’re just put out there on social media,” he said.

Reflecting on the year, Mr Varadkar said Ireland should have systems in place from stockpiling to testing for a future pandemic.

He also said he regretted not calling an Easter election, saying he believes his Fine Gael party might have done better.

The general election in February saw Fine Gael, Fianna Fail and Sinn Fein finish in an almost dead heat, and prompted months of negotiations to form a government.

“Had that happened, we would have had the election after the pandemic and perhaps it would have gone a bit better for me and my party… we may have had a different electoral outcome and in my mind one that would have been better for the country,” he said.

The event was organised to launch 2021 applications for the transatlantic internship programme of which Mr Varadkar is part of the alumni.