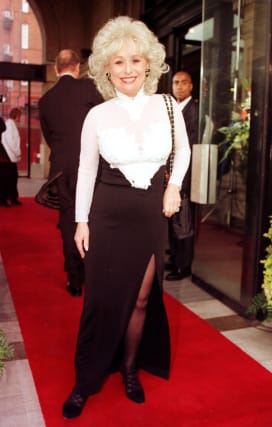 The revered soap star died on the evening of December 10 at a London Care Home, her husband Scott Mitchell said in a statement.

He added: “Her passing was from Alzheimer’s/Dementia and Barbara eventually died peacefully and I spent the last 7 days by her side”.

Mr Mitchell said the EastEnders stars’ final weeks were “typical of how she lived her life. Full of humour, drama and a fighting spirit until the end”.

Ross joined a host of stars from the world of entertainment in remembering the pint-size star.

He tweeted: “Barbara Windsor in real life was everything you might have hoped for. So warm, so funny, so kind. Goodnight sweetheart x #BarbaraWindsor”.

A representative for actor Steve McFadden, who plays Dame Barbara’s on-screen son Phil Mitchell, told PA he was “devastated” by her death.

The Mitchells have been crucial to EastEnders’ success and longevity and viewers were for years gripped by the drama surrounding the family.

Doctor Who star John Barrowman, who was interviewed by Dame Barbara on BBC Radio 2 in October 2011, said in a video on Twitter that the star will be “sorely missed”.

“In the 30-odd years of my career I’ve had many, many occasions where I’ve been in company with Barbara – or, as everyone just called her, ‘Babs’ – and she will be sorely missed,” the British-American actor said.

“She was a small woman but feisty and she had the biggest, biggest heart in the business. And she was a genuine, lovely, warm, caring person and she will be sorely missed by the film, television, radio and theatre worlds.

“We all knew that she wasn’t in great health, but it’s still a shock when it comes.

“Rest in peace, Dame Barbara Windsor. You will be sorely missed.”

He added, referring to his partner, actor and writer Morwenna Banks: “Morwenna – who literally never says anything on social media – has asked me to add how sad she is too.”

Veteran DJ Tony Blackburn also remembered Dame Barbara on social media and in a tweet said she was a “lovely lady who was always such fun. R.I.P. Babs.”

Former Labour MP and broadcaster George Galloway tweeted: “Dame Barbara Windsor passing brings a dismal year to nearly a close. She was a national Treasure which is still something to be. May she rest in peace. #BarbaraWindsor”.

Dame Floella Benjamin and singer Aled Jones both remembered the star as a “national treasure” in tweets.

Irish singing duo Jedward tweeted a montage of Dame Barbara on EastEnders telling people to “get out of my pub” and the former X Factor stars said: “RIP you iconic legend Barbara Windsor”, adding a red heart.
.