Social distancing could be advised for another year, says expert 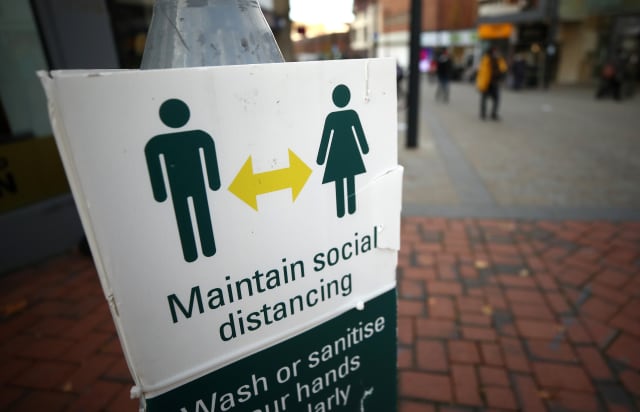 Social distancing measures could be around for at least another year but the worst of the coronavirus pandemic may be over by April, an expert has said.

Tim Spector, professor of genetic epidemiology at King’s College London (KCL), said exiting the pandemic is more likely to be a slow phase-out, rather than everything suddenly coming to an end.

But he added that after Easter next year, things should be more “pleasant” and people might even be able to go on holiday.

Speaking at a webinar as part of the Royal Society of Medicine’s Covid-19 Series, Prof Spector said: “The acute problem, I think, will be over by April.

“But hopefully this isn’t going to affect us too much socially, and I think a lot of this will hopefully be more voluntary.”

Prof Spector, who leads the Covid Symptom Tracker app study which is run by KCL, added people are unlikely to instantly go back to previous practices, with many possibly continuing to work from home, and fewer commuters.

Prof Spector said: “I think we have probably got at least a couple of years where we’re going to see this virus appearing and disappearing… just like having bad flu breakouts every year.

“And we’re going to have repeated injections, we may be tested to see if we have antibodies, and we’ll be understanding a bit of the interactions for our patients – you know, those on immunotherapies or other drugs, much more about.

“So I think this isn’t all going to be over in one go. It’s going be a slow phase-out.

“But I am optimistic that if we can just get our mental state together until Easter, we can hang on in there, it’s going to get a lot more pleasant after that, we can start to relax a bit, and even go on holiday, which would be lovely.”

Reflecting on early interventions made in the UK, Prof Spector said a broader view was not taken until much too late and by then the country was well into a second wave.

Giving an example, he explained: “It took seven weeks of lobbying before the Government and NHS changed their criteria to even allow people with this (anosmia) to get tested.

“There was a lot of this resistance, rather a mindset that I think was wrong at the time that this is just a flu-like illness and everything else is a distraction.”

Prof Spector said that is easy to say in retrospect, but the modelling, the advice given to the Government and the way doubling rates were calculated, were wrong.

He also suggested the nature of stop-start lockdowns causes problems, and the idea that you go from a total lockdown to then a release – where you pretty much go back to normal – is “counterproductive”.

The professor said he does not think the Eat Out to Help Out scheme caused as much damage as some people have indicated, but rather there was a more general problem.

Prof Spector said: “You have these periods of lockdown and then a release, and everyone goes crazy.

“And then you advertise there’s another lockdown coming up so everyone goes out, meets all their friends, goes to the pub – increasing infections, then you lock up with your family and household with your infections and it increases again.

“We’re seeing some of the effects of that in places like Wales at the moment.”

He added that in Wales, the firebreak lockdown was a “pure research experiment” and those measures do not work.

“That’s a very good model of why you need a longer term policy to deal with social behaviour.

“People will react to these short, sharp changes socially, and compliance will change and we’re not with lab rats, and none of the models that some modellers are putting out there really realise that as the environment changes people’s reactions will change,” Prof Spector said.

Commenting on suggestions that London may be moved into Tier 3 next week, the expert said it would be a “big mistake” and everybody should stay somewhere between Tier 1 and Tier 2 until April when the effects of a Covid-19 vaccine are likely to be seen.

Prof Spector said he fears the festivities and drinking that would take place if people thought they only had a couple of days before stricter measures came into place.

“It would be madness to do that,” he said.