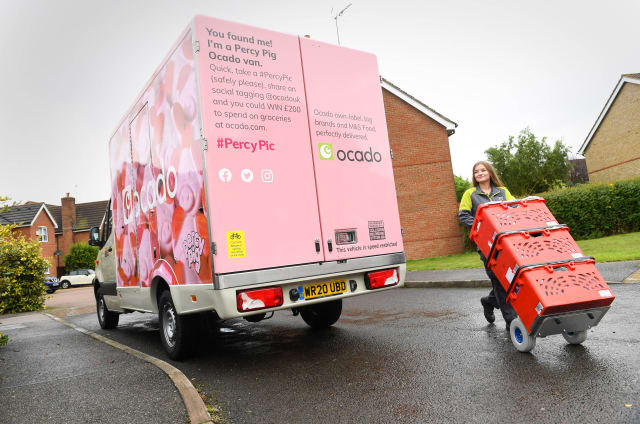 Ocado saw sales jump by more than a third in the run-up to December, as harsher lockdown conditions in England benefited the online supermarket.

Retail revenue jumped by 34.9% compared to last year in the 13 weeks to the end of November, Ocado said, reaching £579.6 million.

The supermarket said its customers had placed around 360,000 orders a week on average during the period, only an increase of 10,000 compared to last year.

The company is half owned by Marks & Spencer and started delivering its products in September this year.

The partnership is continuing to generate strong sales as people stocked up on M&S fresh everyday essential categories, Ocado said.

“We continue to make good progress bringing even greater choice, quality and value to our customers following the switchover to M&S at the beginning of September,” said Ocado Retail chief executive Melanie Smith.

She added: “Despite exceptional demand during the period, we have high rates of on-time customer delivery and low rates of substitutions.”

Three new warehouses are expected to come online next year in the UK, adding about 40% to Ocado’s capacity.

Its strong results meant that Ocado upped its guidance for the second time in just over a month.

Ebitda (earnings before interest, tax, depreciation and amortisation), is now expected to hit £70 million. This is up from £60 million a month ago, and from £40 million before that.

Sophie Lund-Yates, an equity analyst at Hargreaves Lansdown, said Ocado is one of the lucky businesses that can say lockdown helped sales.

“This isn’t just good news for revenues, but profits too. A higher volume of sales rattling through warehouses boosts margins, which is why the group has been able to upgrade cash profit guidance once again,” she said.

“Customers are shopping more frequently throughout the week as Covid-19 disrupts yet another pattern of everyday life. Where there used to be peaks and troughs, the trading week has been smoothed out.”