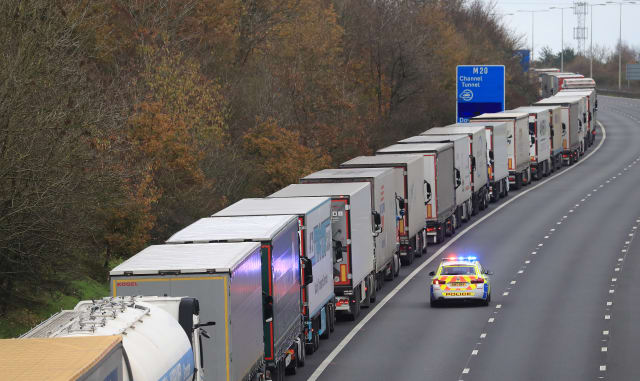 Members of the House of Lords have expressed concern about lack of facilities for lorry drivers who need to “answer the call of nature” if they get caught short in post-Brexit traffic jams near ports.

Lack of roadside toilet facilities is just one indicator that the UK is not ready for the expiry of the Brexit transition period at the end of the month, according to the Lords EU Goods Sub-Committee.

Chair of the sub-committee, Baroness Verma, said: “Has the Government actually considered how and where drivers, who may be stuck in long queues, will answer the call of nature, or take their legally required breaks?”

The Government has been making contingency plans for traffic control of lorries entering and leaving UK ports from January 1 amid warnings of major hold-ups.

In a letter to Cabinet Office minister Michael Gove, the sub-committee said: “The necessary technological, physical and welfare arrangements that need to be in place in time to avoid or mitigate significant disruption to the import and export of goods following the end of the transition period are not in place.”

The committee states that five evidence sessions it held last month showed crucial IT systems to deal with customs declarations and accessing Kent are still in testing and may not be ready for the end of transition.

And that traffic management plans are vulnerable to closures, while facilities for drivers “are inadequate and will have serious welfare, safety and legal implications for those stuck in what may be delayed queues”.

The committee heard that animal welfare issues may arise for vehicles carrying livestock if they are stuck in queues for a long time.

Baroness Verma added: “Our committee is very sceptical that the necessary physical customs infrastructure, both at ports and inland, will be ready.

“The Government has not prepared enough for the realities of moving goods across the Channel.

“It has been too optimistic and this has been reflected in weak and undeveloped contingency plans at every level.

“How aware businesses are of what they need to do to prepare for post-transition is the great unknown.

“This lack of awareness worries us because the smooth movement of goods requires every vehicle to have completed the necessary customs checks in advance.

“The welfare and safety of drivers, which must be top priority, has simply not been properly thought through.

“Disruption following the end of transition will threaten jobs and the flow of essential goods into the UK.

“The Government must get a grip of the situation and take the swift actions our letter recommends in order to mitigate disruption.”