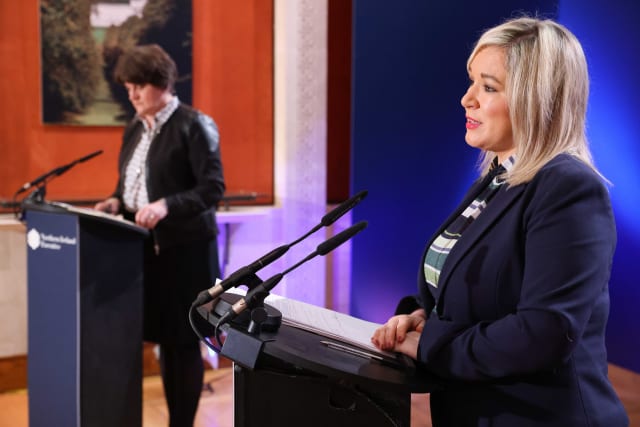 Stormont leaders have defended the relaxation of circuit-breaker restrictions in Northern Ireland at a time when daily death and infection numbers remain high.

First Minister Arlene Foster and deputy first minister Michelle O’Neill also pledged to take the Covid-19 vaccine in public as they urged people to stick with regulations set by the Executive until the jabs are rolled out across the region.

The leaders of the powersharing administration justified Friday’s reopenings as health minister Robin Swann warned that a “festive free-for-all” would be “catastrophic” for the region’s under-pressure hospital system.

Shops and much of the hospitality sector are reopening after two weeks of strict measures to curb the spread of the virus. Pubs that do not serve food will remain closed.

Cinemas, museums, galleries and gyms will reopen and normal church services can resume, with more people allowed to attend weddings and funerals.

On the eve of the move, Northern Ireland recorded 14 new Covid-19-linked deaths on Thursday and 441 new cases of the virus.

There have been 67 deaths in the last seven days – up seven on the previous week.

On Wednesday, Stormont’s chief scientific adviser warned that compliance with the circuit-breaker had not been at the level health chiefs had hoped for.

During a post-Executive meeting press conference on Thursday, Mrs Foster and Ms O’Neill were pressed on whether the relaxations were advisable given the infection and death rates.

Mrs Foster highlighted that data was reported with a lag and said she anticipated rates would soon begin to fall in response to the circuit-breaker measures.

The DUP leader said the fact the reproduction rate of the virus (R) had dropped to “around 1” had given the Executive the “headroom” to proceed with the reopenings.

“Safety is paramount,” she said.

“The easing of the restrictions does not mean that there’s any easing of the need for each person to follow the public health guidelines.”

She stressed there was no easing of restrictions on household gatherings and made clear relaxations on festive family get-togethers only came into force on December 23.

In reference to the non-compliance evidence presented by Professor Young, Mrs Foster said people were “tired” with Covid-19.

“We’re pleading with people, to stick with us and we know, we’ve looked at the behavioural piece in terms of what’s been going on, not just in Northern Ireland, but in other countries as well, and the longer that this goes on, the less adherence there is and that that is a real difficulty,” she said.

“And we’re just saying to people have personal responsibility for yourself, for your friends, for your family so that we can get to the stage where we can keep everybody safe with the vaccination programme.”

Ms O’Neill said the decision to lift some of the relaxations reflected the need to balance public health and economic concerns.

“The decision to lift some of the restrictions, and obviously it’s not all restrictions, is as a result of the conversation at the Executive and it’s supported by obviously the public health team,” she said.

“But as with all these things the whole way through the pandemic we’ve always tried to get a balance between protecting lives and protecting livelihoods.

“And we know how challenging this is for many people who’ve lost their jobs, many families that are struggling to put food on the table as a direct result of not having an income coming in.

“And we know this is a very difficult situation for many people, so we’re always trying to find that balanced way forward.”

She urged people to stick with the regulations.

“Don’t throw in the towel yet,” she said.

“It’s not time. There is light at the end of the tunnel, there is a way through, the vaccine is here, it has started its rollout.

Safety guidance for the reopening of hospitality businesses was published on Thursday.

No more than six adults from no more than two households are allowed at a table. Closing time will be 11pm at the latest.

All outlets will also be required to collect the details of each customer to assist with contact tracing.

“While we all want to enjoy the festive season, we must never get complacent about the Covid-19 threat,” he said.

“The virus is still circulating in our community and is still claiming lives.

“Each of us has choices to make about our actions. If there is a festive free-for-all with public health advice ignored, then it will cost lives and place unbearable pressure on our hospitals. We must avoid these catastrophic consequences.”