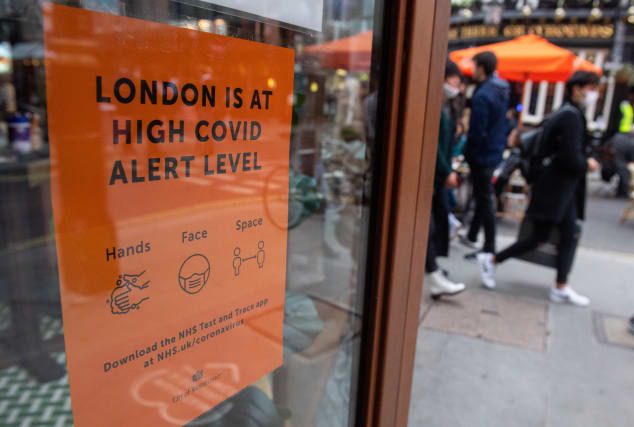 The harshest coronavirus restrictions would be “catastrophic” for London, mayor Sadiq Khan warned as rising cases threatened to push the capital into Tier 3.

London has the highest rate of cases in England and could face being placed in the highest tier of restrictions after the allocations are reviewed on December 16.

The capital is one of only three regions where Covid-19 cases are rising according to the latest weekly surveillance report from Public Health England.

London mayor Mr Khan told the PA news agency: “I think it’s really important we do all we can to avoid the virus spreading, to avoid going into Tier 3.”

Under England’s toughest level of restrictions pubs and restaurants would only be able to offer takeaway services and households would be banned from mixing except in certain outdoor spaces such as parks.

People would also be urged to avoid travelling outside the area and fans would again be banned from sporting events.

London is currently in Tier 2 and Mr Khan said: “Tier 3 would be catastrophic to our hospitality sector – pubs, bars, restaurants would be seriously affected, and our cultural venues.

“Londoners have made huge sacrifices over the last few weeks and months.

“It’s really important, leading up to Christmas where the rules will be relaxed even more, we do all we can to keep ourselves safe, our families safe but also don’t allow the NHS to be overwhelmed in January.”