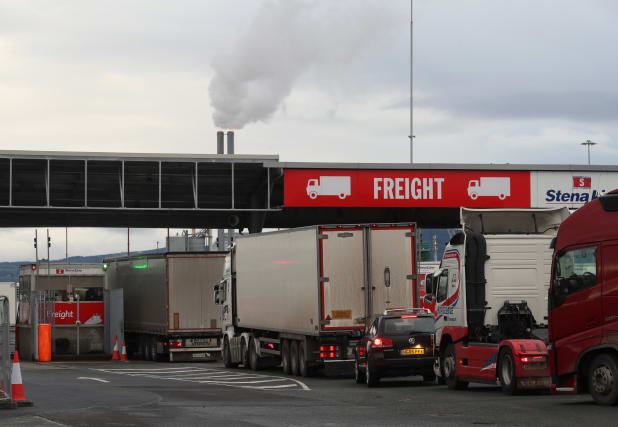 Irish hauliers connecting the island to Europe via the UK will grapple with 13 different pieces of paperwork if there is no trade deal, the industry has warned.

They face possible congestion approaching ports like Dover or a longer and more expensive ferry service directly from the Republic to the continent.

Eugene Drennan, president of the Irish Road Haulage Association, said the country would be left out on a limb.

He said: “It will be a big cost in money and time.

“Time is so crucial to us.

“We depend on road transport for nearly everything on a limited time frame.”

Around a million freight journeys traverse the Irish Sea every year.

More than 150,000 cross the land bridge between the Republic of Ireland and Europe via the UK, Mr Drennan said.

Freight companies use Irish ports like Dublin or Rosslare and Holyhead or Liverpool in the UK.

Others travel through Northern Ireland and Scotland.

Together, they will be among the first to feel the ramifications of no-deal.

The hauliers’ industry spokesman Mr Drennan said: “There will not be a protocol or a methodology to how we are doing business.

“It will mean slower processes, more checking, ensuring that whatever the processes of doing that business will be slower.”

He expected costs to mount.

“After January 1, if we go through the UK and the land bridge, we will have 13 steps, 13 different iterations of filing paperwork.

“Those include on our side, at Kent, at Calais.

“It will be quite a big cost and then the tariffs.”

He added: “A no deal would make that already complicated process more difficult.”

Irish hauliers whose destinations are in mainland Europe are concerned about being caught up in congestion near Dover even though they are only using the UK as a transit point between EU countries.

Mr Drennan said it may be possible to speed up their journeys through the ports but it was “pie in the sky” to imagine that a driver in a queue on a Kent road would pull over to let one from the Republic through.

He said further direct ferry routes between Ireland and the continent were being developed.

It has been branded the “Brexit buster” because of its capacity to take unaccompanied trailers on direct sailings by-passing the UK.

Other services are available linking France with Ireland but the costs are greater and the journeys longer than via the UK, around 24 hours in some cases according to Mr Drennan.

He added: “We have to get to market with surety.”

Ferry operator Stena Line has announced an additional vessel on the Rosslare Europort to Cherbourg route and the doubling of weekly sailings.

This will bring Stena Line frequency on the route from three to six weekly each way direct services from January.