Grandfather tells lifeboat crew ‘I owe you everything’, 50 years after rescue 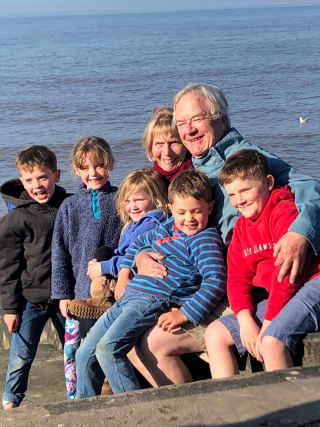 A grandfather has written to the lifeboat crew who saved his life in a force 10 gale 50 years ago to tell them: “I owe you everything.”

Martin Stephen, then aged 21, almost died when he jumped into the sea to try and rescue his cousin David Jeffrey, 11, who had been swept off the rocks at the entrance to Dunbar harbour on December 23, 1970.

Mr Stephen was unconscious and sinking beneath the waves when Dunbar RNLI lifeboat crewman David Brunton jumped into the water to grab him, and his colleague Jonathan Alston also leapt in to help.

The rest of the crew then hauled the three men back on board and managed to get Mr Stephen breathing through mouth-to-mouth resuscitation.

The lifeboat searched for David’s body but he could not be found.

As the 50th anniversary of the rescue approaches, Mr Stephen, now 71 and a retired headteacher and writer, wrote to current Dunbar lifeboat coxswain Gary Fairbairn to thank the crew.

Mr Stephen, who lives in Norfolk, wrote: “I’ve had 50 years of the happiest possible marriage, three sons and five grandchildren.

“All in all I’ve been able to live a wonderful life, but only because of the bravery of one man, the skill of another and the dedication and courage of the crew of the Dunbar lifeboat.

“I owe you everything.”

Mr Stephen was a student in Sheffield and his family were in Dunbar, East Lothian, that year to spend Christmas with his aunt Maeve Jeffrey.

The tragedy occurred when he and his cousins David and Angus, 14, went to watch waves as high as 10 metres crash over the harbour wall.

Mr Stephen said: “We were standing at the mouth of the harbour when a freak wave came over, caught Davie and smashed him against the rocks, knocking him into the water.

“I hadn’t even realised he had been standing higher up on the rocks. As soon as I saw him I jumped in and managed to reach him. I held him in the rescue position but we kept going under. I think he was already dead.

“We were in about a 10ft swell and kept going under. We were in the water for about 10 minutes.”

He kept swimming and eventually lost consciousness but Angus raised the alarm and the lifeboat was launched in four minutes.

Mr Brunton was awarded the RNLI Bronze Medal for Gallantry and Mr Alston received the institution’s Thanks on Vellum for the rescue.

Mr Brunton has since died, but Mr Fairbairn was able to put Mr Stephen in touch with his son Jamie, 61, who still lives in the town.

The retired engineer said: “I am very proud of my dad and what he did.

“I have very little memory of the day other than it was not normal as dad came home soaking wet.

“I don’t think I really understood the risks the RNLI take and the dangers the crew face and how dad had saved a man’s life at great risk to his own until Martin got in touch to tell me his story.

“Our family is extremely proud.”

At one stage, six Brunton brothers volunteered on the crew.

Mr Stephen said his aunt refused to blame him for the tragedy and “the forgiveness from the family has been one of the crucial things that allowed me to keep on living”.

Mr Fairbairn said: “It was such a wonderful letter for the station to receive and we’re very grateful to Martin for getting in touch.

“It reminded the crew why we do what we do and brought home how proud we are of the crews that have served before us.”