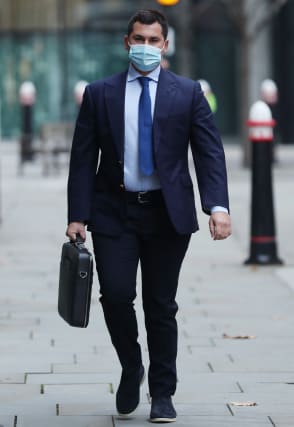 A Russian billionaire’s son embroiled in his parents’ £450 million divorce fight has told a judge how his mother and father had affairs when he was young.

Temur Akhmedov, 27, told Mrs Justice Gwynneth Knowles that his father, businessman Farkhad Akhmedov, had left his mother, Tatiana Akhmedova, to “her own devices” and “she him”.

Farkhad Akhmedov had a relationship with a woman who he is now married to.

His mother once referred to the woman as a “whore” who wanted to “take everything away from us”.

Ms Akhmedova had a relationship with the brother of one of his friends and with an art dealer, he said.

He recalled one of the art dealer’s socks – which bore a name tag – turning up once in family laundry.

Ms Akhmedova, 48, who describes herself as “Russian by origin” but lives in London, is trying to get her hands on around £450 million that she is owed by Mr Akhmedov, 65, following the breakdown of their 20-year marriage.

She has taken legal action in Britain and abroad in a bid to trace assets she says her ex-husband has tried to put beyond her reach.

Ms Akhmedova is also suing Temur, their eldest son, who is now a London trader.

She says he has helped his father hide assets and owes her nearly £70 million.

Temur Akhmedov denies the allegations against him and says his mother’s claim should be dismissed.

He agreed, when questioned by a lawyer representing his mother on Wednesday, that his father had put in place a structure to ensure that an award made by a judge was not paid.

But he said: “I was not the lieutenant or the orchestrator of these schemes.”

Mrs Justice Knowles is considering evidence in the dispute between mother and son at a trial in the Family Division of the High Court in London.

Temur Akhmedov said the “present situation” had been “in many ways quite frightening”.

“For some time, my relationship with my mother has sadly been, for reasons that are quite painful to me to describe, very difficult,” he said, in a written witness statement.

“But even against that history I could never have imagined that our relationship would break down to the extent that she would bring litigation against me, particularly on the scale that is currently taking place.”

He added: “I feel that she must hate me and, after everything I have already experienced in my childhood, this causes me an immense amount of pain and distress.”

Ms Akhmedova has told the judge that she loves her son and hopes their relationship can be rebuilt.

She said suing him had been an “incredibly difficult” decision.

Ms Akhmedova was awarded a 41.5% share of her ex-husband’s £1 billion-plus fortune by a London judge in late-2016.

Mr Justice Haddon-Cave said she should receive £453 million – which lawyers said was the biggest payout of its kind.

But judges have heard that she has so far only received about £5 million and Mr Akhmedov has not voluntarily paid anything.

Mr Akhmedov says because he and his ex-wife are not British, and were not married in Britain, a British judge should not have made a decision.