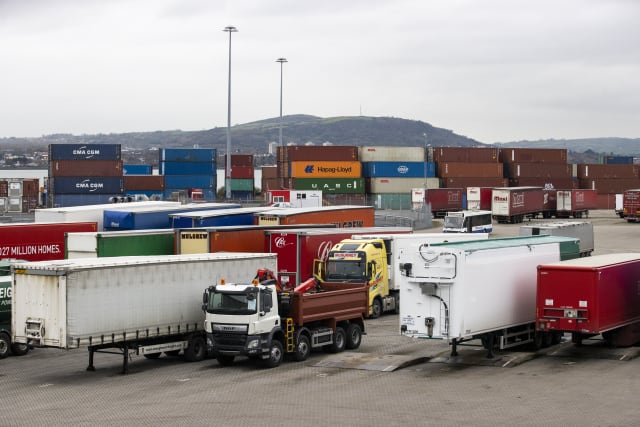 Supermarkets in Northern Ireland will be given a grace period to adjust to new post-Brexit Irish Sea trading arrangements, the Government has confirmed.

Retailers had warned that food supplies could have been disrupted from January 1, with additional checks and paperwork delaying the transportation of food supplies from Great Britain.

The three-month grace period is part of a series of measures agreed by the UK and EU on how the Northern Ireland protocol will operate. They will apply whether a wider EU/UK trade deal is agreed or not.

The protocol will see Northern Ireland remain in the EU Single Market for goods, necessitating additional regulatory checks and certifications on animal-based products entering the region from Great Britain.

Cabinet Office Minister Michael Gove confirmed to the Commons that the deal would enable the Government to withdraw specific elements of the Internal Markets Bill that would have overridden parts of the protocol in breach of international law.

“This deal would keep goods flowing between Great Britain and Northern Ireland in January, and indeed provide some necessary additional flexibilities,” he added.

“It protects Northern Ireland’s supermarket supplies. We heard throughout the year that traders needed time to adapt their systems, that’s why we’ve got a grace period for supermarkets to update their procedures.

“Our agreement also prevents any disruption at the end of the transition period on the movement of chilled meats. British sausages will continue to make their way to Belfast and Ballymena in the new year.”

While Northern Ireland will remain in the UK customs territory, under the terms of the protocol the region has to apply EU customs rules at its ports.

That means tariffs would be collected on goods moving from GB to NI if they were due for onward transportation to the Irish Republic.

The requirement to collect tariffs on goods deemed “at risk” of onward transportation has been an ongoing source of contention.

Mr Gove said another controversial element of the protocol – the prospect of goods moving from Northern Ireland to GB requiring export declarations – had been all but eliminated.

He said those would now only be required in the “very limited and specific exception” of trade in endangered species and conflict diamonds.

Mr Gove confirmed there would be no permanent base in Northern Ireland for EU officials to oversee the implementation of the protocol, but they would be able to accompany UK officials to monitor its application.

Of the protocol operation deal agreed between the UK and EU, he said: “We’ve been able to deliver a package, which now means that the protocol can be implemented in a pragmatic and proportionate way.

“It takes account of the Belfast/Good Friday Agreement, in all of its dimensions and it protects the interests both of the EU single market, but more importantly, the territorial and constitutional integrity of the whole United Kingdom.”