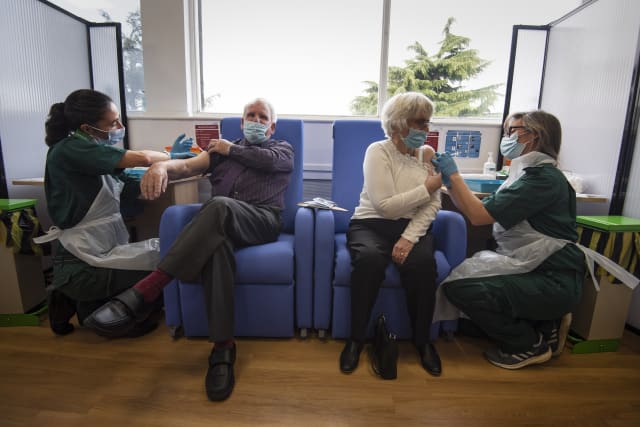 Two grandparents who served the NHS for 80 years between them held hands before they became one of the first couples in the world to receive the Pfizer coronavirus vaccination.

Victor and Penny Griffiths had their jabs at Basildon University Hospital in Essex where they worked from the 1960s, during the second day of he vaccine rollout in the UK.

Jabs began being administered at 70 hospital hubs across the UK from Tuesday – dubbed “V-Day” by Health Secretary Matt Hancock – starting with healthcare workers, people living in care homes and the elderly.

Mr Griffiths, 86, who worked as a radiographer, said he and his 80-year-old wife Penny, a former nurse, are looking forward to being able to see their 13 grandchildren – who range in age from four to 37 – for the first time since March.

The pair, who married three months after they met at Connaught Hospital in 1963 following a “whirlwind romance”, said it has been “devastating” to watch the NHS fight the pandemic, but they are “over the moon” to be among the first to receive the vaccination.

Mr Griffiths said: “We’re very excited about it because we have been doing the right thing, we’ve been self-isolating and trying not to mix in supermarkets and things like this… we’re over the moon about it.”

Speaking about the pandemic, he said: “It’s the worst thing we’ve ever known, people dying… our son got coronavirus.

“It’s really exciting that the vaccine is here now and hopefully we can get on with life now.”

Mrs Griffiths added it “would be nice” to hug their grandchildren after they receive their second vaccine dose in January.

She said they have only seen them “through the window” to drop off sweets since lockdown started.

Mr Griffiths said he wanted to tell anyone who might be worried about getting the vaccination to “have it done and get on with life”.

He added: “Don’t worry about it all, because the worry is that you might catch the coronavirus.

“Our zest for life doesn’t diminish as you get older, but the anxieties about catching something or doing something that may stick a spanner in life… as far as I’m concerned both of us want to have it done and get on with life.”

The pair, who are also ballroom dancing partners, said they enjoyed holidays, playing golf and bowling before lockdown, and they are looking forward to getting back to their hobbies as restrictions are lifted.