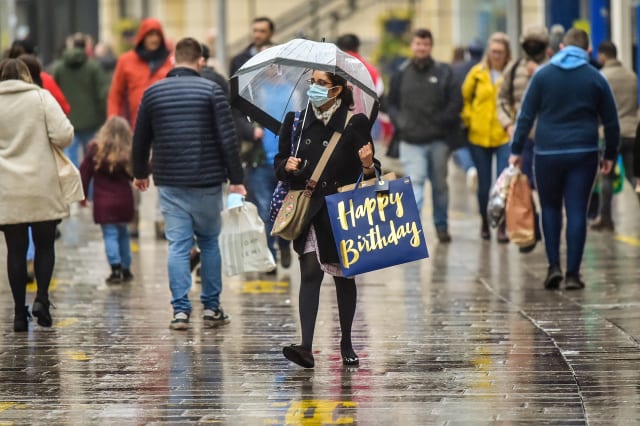 Christmas shoppers should walk out of crowded stores if they feel unsafe, a senior public health director has said.

People should also think strongly about not having elderly relatives around the Christmas table, but rely on new technology to keep in touch on December 25, to reduce the risk of spreading Covid-19, Amanda Healy said.

The chair of the Association of Directors of Public Health North East was speaking after a survey conducted in the region found that more than half of the respondents wanted to follow the rules but they “found it hard” to stick to social distancing guidelines.

The research also showed that 71% of North East residents were “very worried” about the UK-wide Covid situation; one in three found it hard to stick to household mixing rules and 15% admitted to deliberately bending the rules.

Ms Healy, who is County Durham’s director of public health, said infection rates were falling across the North East of England and she thanked residents for their efforts to protect communities and the NHS.

She urged people over Christmas to continue to make small changes to their habits which together could make a major difference to the spread of Covid-19.

Speaking about the survey, she said: “One of the key findings was people were finding that social distancing was the thing that was a real challenge.

“People were finding it difficult going into shops, so it’s getting people to think about, if it’s difficult and if you go into a shop that’s really busy and you don’t feel safe, go back later, go at another time.”

Ms Healy praised the majority of local retailers who were maintaining measures to keep shoppers safe.

Speaking about inviting older relatives around to join in the celebrations, Ms Healy agreed it was a “really challenging time” for families and said the Government had put the responsibility for that choice onto individuals.

She said: “Our advice to families, particularly if you have older relatives who are more vulnerable or those who are at risk of Covid-19, would be to really think about, do you need to mix on Christmas Day?

“Keep those contacts as low as possible.

“Try to do it in a different way if you can, because would we really want to spoil things now, when we do have a vaccine?

“It will take a few months to roll out but we have some hope, that would be the message for Christmas.

“Be patient. Could you do it in a different way?

“Communities have been really innovative throughout Covid using technology they have never used before – that does include me – we need to keep going with that a little bit longer.

“I know it’s difficult, people do want to hug their relatives, but let’s just keep as safe as possible for that bit longer.”

The local authorities of Northumberland, Newcastle, Gateshead, South and North Tyneside, Sunderland and County Durham have combined to set up the beatcovidne.co.uk website to assist residents.