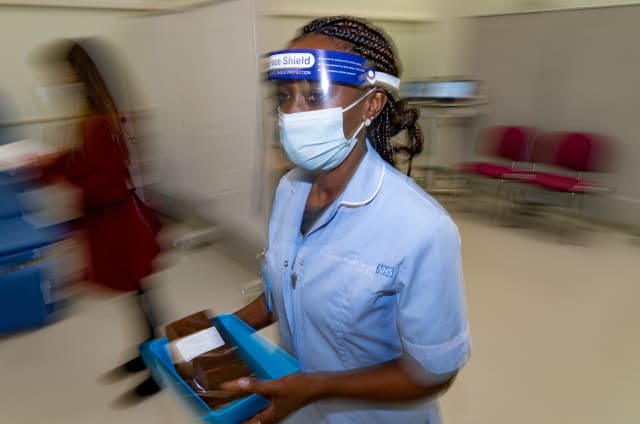 Professor Chris Whitty has said he will take any Covid-19 vaccine offered to him, adding it is a “society” and “political” decision as to when restrictions are lifted.

England’s chief medical officer told MPs he would be keen to have a jab to protect him, as the NHS vaccination programme continues across the UK.

He said that once around 20 million people in at-risk groups, over-50s and health and care workers are vaccinated a decision can then be made about whether tough restrictions are eased.

It comes after Health Secretary Matt Hancock said on Tuesday that he was hopeful the country could be back to normal by summer.

Prof Whitty told the Commons Science and Technology and Health and Social Care Committee: “When it gets to my stage to be vaccinated – and I’m nowhere near the top end of the tiers so it won’t be for a while – I will absolutely have the vaccine when it is appropriate for me to do so.

“I will either have a choice between having no vaccine or the vaccine that is available for me at that stage, and I’ll be very happy with that.

“I don’t really have a strong view as to which good vaccine I have, provided it’s safe and effective, which is what the whole (regulatory process) … is there to do.”

Asked at what point restrictions may no longer be needed, he said it was a “de-risking process”.

Vaccination will reduce the Covid-19 death rate and hospital admissions and then decisions can be made, he said.

“At a certain point, society, through political leaders, through elected ministers and through Parliament, will say this level of risk is a level of risk that we think it is appropriate to tolerate,” he said.

“At a certain point you say, ‘actually, the risk is now low enough that we can largely do away with certainly the most onerous things that we have to deal with’.

“This will be a kind of gradual retreat from that, but it is a de-risking process rather than it’s just going to go away.

“We will de-risk hopefully to a very low level of risk, but I think it’s very unlikely we’ll get to zero level of risk.”

Prof Whitty said that even after vulnerable groups are vaccinated, “that does leave a lot of people who could, for example, have all the syndrome of things that are currently called long Covid, there are a variety of other medical things, it’s not that that will get rid of the problem completely.

“If you only were to vaccinate those 20 million people – the numbers are rough but for the sake of argument – you are still going to have a lot of people who are susceptible.

“That will not produce population immunity even if it prevents transmission.

“So what that will do is substantially reduce mortality, significantly reduce the impact on the NHS, but it will still leave a lot of people who could become ill with this, and could in some cases have serious outcomes.”

Sir Patrick Vallance, England’s chief scientific adviser, said there would still be coronavirus transmission among the population once the most vulnerable are vaccinated.

On lifting restrictions, he said it is a “science-informed political decision”, adding: “Priority number one has to be protect those who are most vulnerable, you can see the effects of that.

“There will still be transmission amongst others at that point, so we need to be aware of that, and then we will know a bit more as we learn about transmission across the different vaccines, what effect they have.

“But, ultimately, then there are some decisions to be made about how much risk society wishes to take with that.”

Prof Whitty said that despite the “self-discipline” and “altruism” shown so far by the British public, optimism over vaccines should not cause people to relax now.

“We’re heading into spring of 2021 in much better shape than we were three or four months ago,” he said.

“The first response would be to say, ‘well that’s it, it’s done’ – that would be disastrous, because then, actually, the wave would come back incredibly quickly.”

He said vaccines are “by far the strongest tool we have in our box” to enable people to hug relatives and friends again.

Sir Patrick added there was a risk of the public thinking the pandemic is “all over” due to the Pfizer coronavirus vaccine being rolled out.

“The biggest risk we face now is everyone thinks this is all over,” he said. “And it isn’t all over.

“We’re a long way off yet knowing how we can move it to the rest of the population, that’s dependent upon things like does the AZ (AstraZeneca/Oxford) vaccine get approved.

“It’s not the time to suddenly say we relax everything and, if that happens, we will have a big surge.”

Earlier, Prof Whitty said the UK should have access to three or four vaccines by the middle of next year.

It came as the Medicines and Healthcare products Regulatory Agency (MHRA) gave precautionary advice to NHS trusts that anyone who has a history of “significant” allergic reactions to medicines, food or vaccines should not receive the jab from Pfizer/BioNTech.

Two NHS workers with a history of serious allergy suffered an allergic reaction after receiving the vaccine on Tuesday as the NHS rollout got under way.

Both had a significant history of allergic reactions, and carried adrenaline auto-injectors with them.

Prof Whitty told MPs the NHS and the MHRA are in a “very good position” to pick up “extremely rare” issues with any vaccine once it is in use.

Patel: police data loss will not mean criminals ‘getting away’ with offences