As post-Brexit talks continue, here are the main sticking points 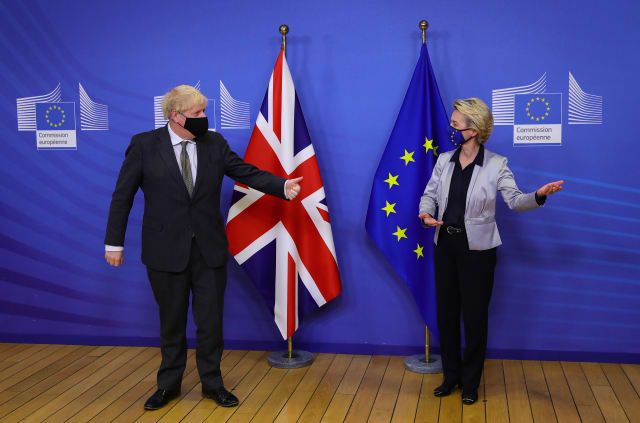 The deadlock comes down to persistent sticking points between London and Brussels over the long drawn-out exit from the EU by the UK.

Mr Johnson has insisted that no British prime minister could accept EU demands to  continue to maximise access to UK waters for its fishing fleets after the Brexit transition period expires on December 31.

The UK argues the UK is now an independent coastal state and should be able to prioritise its own boats.

Mr Johnson told the Commons ahead of his dinner with Ms von der Leyen on Wednesday: “They (the EU) are saying that the UK should be the only country in the world not to have sovereign control over its fishing waters.

“I don’t believe that those are terms that any prime minister of this country should accept.”

The so-called “level playing field” rules are intended to ensure businesses on one side do not gain an unfair advantage over those on the other side.

In exchange for continuing access to the single market, the EU is seeking a high degree of alignment by the UK with its standards on workers rights, the environment and particularly state aid for businesses.

Mr Johnson said: “Our friends in the EU are currently insisting that if they pass a new law in the future with which we in this country do not comply or don’t follow suit, then they want the automatic right to punish us and to retaliate.”

– Where does this leave the negotiations?

Dialogue will continue until Sunday when Mr Johnson and Ms von der Leyen agreed that a “firm decision” should be taken about the future of the talks.

Downing Street sources said that “very large gaps” remain between the two sides and it is unclear they can be bridged, as London continues to insist it could live with a no deal outcome.