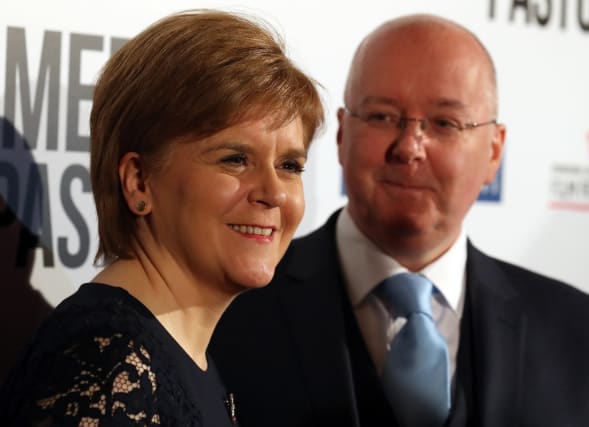 SNP chief executive Peter Murrell has said he was not aware of harassment complaints being made against Scottish Government ministers.

Mr Murrell, who is married to Scotland’s First Minister and SNP leader Nicola Sturgeon, also told MSPs he only became aware of allegations of an incident involving her predecessor Alex Salmond at Edinburgh Airport after a press inquiry.

He has appeared before the Holyrood committee set up to investigate the Scottish Government’s botched handling of harassment allegations against the former first minister.

Mr Salmond was awarded more than £500,000 after the Court of Session in Edinburgh ruled the way the complaints were dealt with was unlawful.

Mr Murrell, giving evidence under oath to the Committee on the Scottish Government Handling of Harassment Complaints on Tuesday, was asked about claims previously made by the FDA union, which represents civil servants.

Conservative MSP Margaret Mitchell said the union received “approaches on behalf of about 30 members in relation to at least five ministerial offices”.

While some of these were “resolved through mediation and formal resolution”, Ms Mitchell added: “We know from Leslie Evans the Permanent Secretary’s evidence that a number of these concerns were about bullying and harassment.”

She asked Mr Murrell: “These were obviously SNP offices with SNP ministers.

“Do you consider it was a failing in the party that you were apparently unaware of any of this going on?”

The SNP chief executive told her: “These would be Scottish Government complaints that were being processed, they wouldn’t be SNP complaints.

“The SNP was not aware of any complaints at that time.”

Ms Mitchell said: “Isn’t it strange that we are looking at SNP ministers – all right they have a government role but they are first and foremost members of the SNP – but you as chief executive and apparently the First Minister absolutely oblivious to this?”

Mr Murrell, who has been SNP chief executive since 2000, told her: “I can only speak for myself, I wasn’t aware of any complaints.”

She then asked him about a “media inquiry” made to the SNP in November 2017 “regarding an incident at Edinburgh Airport”.

Mr Murrell said the inquiry was received early in the evening.

“I think Nicola and I were going to an event shortly thereafter,” he told the committee.

“I think in her evidence she set out what action she took so that is the action the SNP took at that time to inquire about that matter with Mr Salmond.”

Asked if that was the first time he had been made aware of the alleged incident, Mr Murrell replied: “Yes, it was.”

He also told the committee how the SNP changed its procedures in light of allegations made at Westminster and the MeToo movement.

Mr Murrell said he spoke to solicitors used by the SNP so they could establish an external “independent mechanism” for reporting complaints.

He said: “There was the MeToo movement of that autumn that was circling the world, effectively, in the Western world lots of organisations, political parties amongst them were putting in new arrangements for reporting concerns.

“The previous week at Westminster, Theresa May was having to deal with allegations involving Conservative members and there was some suggestions of Labour members as well.

“So there was lots of activity at that time around the world, and in UK politics, about allegations of historic sexual misconduct by people.”

When asked if during his 20 years as chief executive he had ever had to speak to the police, or take action as a result of such concerns, Mr Murrell said he had not.