Scientists find size is important for the mating of shipworms 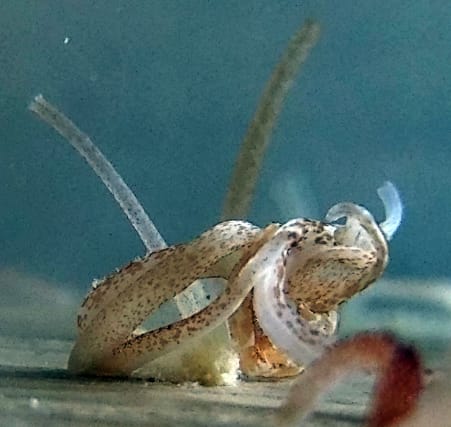 Scientists have found that size does matter when it comes to the “sexual frenzy” of the mating of shipworms.

Dr Reuben Shipway, from the University of Portsmouth, has filmed for the first time the “wrestling and sparring” as dozens of the worm-like gender-fluid clams engage in pseudocopulation.

The shipworm is common throughout the world’s oceans and causes billions of pounds of damage by eating wooden ships, docks, piers and sea defences.

Dr Shipway said: “When we first noticed these animals reproducing in the aquarium, we couldn’t believe what we were seeing. They were using their siphons to wrestle and inseminate one another and trade sperm. As far as we know, this wrestling and jousting hasn’t been reported before.”

The animals have two long siphons – one is used to breathe in water and the other to expel waste – and these are the only parts of the shipworm protruding from the wood.

In the footage recorded for the study published in Biology Letters, multiple shipworms were recorded mating with one another, with some receiving sperm at one end, and planting their own sperm in a different shipworm at the same time.

Some are seen removing sperm from themselves, and others can be seen wrestling with rivals and removing a rival’s sperm as the creatures fight it out to reproduce.

Describing the mating, Dr Shipway said: “The siphons of these animals were just going crazy and I was witnessing a sexual frenzy.”

The researchers believe that shipworms which grow quickly to a larger size have a competitive advantage because they have longer siphons, enabling them to fend off rivals and fertilise their neighbours.

Dr Shipway said: “While pseudocopulation has been known for some time to occur in shipworms, this may be the first time the behaviour has been caught on film and the first time its apparent competitive nature has been revealed.

“It’s a rare and sophisticated form of reproductive behaviour, with sparring between rival mates, pulling potential mates closer and away from rivals, and going as far as to include pulling a rival’s sperm out of a siphon so it floats away.”

He added: “Shipworms have evolved a stunning diversity of reproductive strategies – some simply spawn their eggs and sperm into the water, some recruit a harem of dwarf males to mate with, and now we know they compete to directly inseminate each other using their siphons.”