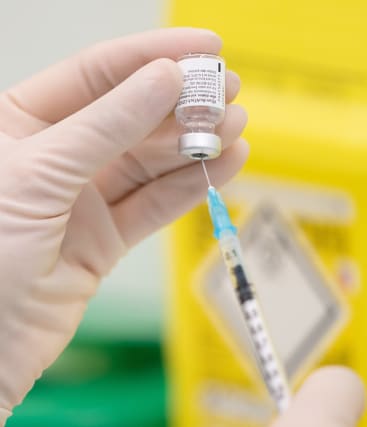 All residents at an East Belfast care home have been vaccinated.

A person aged 100 was among 25 vulnerable occupants and 35 staff to receive the Covid-19 jab at a home which specialises in supporting those with dementia.

Palmerston manager Paul Johnston had around 24 hours notice that a mobile vaccination team of health workers would be arriving on Tuesday.

He said: “We are very pleased to be the first care home in Northern Ireland to be included in the Covid-19 vaccination programme.

“This has been an incredibly tough year for the care home sector and it is great to be able to end it on a hopeful note.”

The first person to receive the Covid-19 vaccine in Northern Ireland earlier said it felt like a “huge moment” in the battle against the pandemic.

Joanna Sloan, 28, is sister in charge of the team of vaccinators for the Belfast Health and Social Care Trust, Northern Ireland’s largest.

She received the jab at the Royal Victoria Hospital in West Belfast shortly after 8am on Tuesday morning, and said it felt like she had cleared the final hurdle.

The nurse, from Dundrum in Co Down, said: “I feel privileged and honoured and a little bit emotional that we have got here – very, very grateful.”

She felt “apprehensive and nervous” beforehand.

As the vaccine was administered, she said she was thinking: “At last – we are here.”

Ms Sloan added: “Through everything that healthcare workers (went through), either in hospital or (the) community – people themselves losing family members, us losing colleagues – it felt like it was a huge moment and that this was and could possibly be the final hurdle in the fight against Covid.”

She is a former emergency department nurse and has been in her job for six years.

The nurse is engaged, but her wedding was postponed due to the pandemic.

She said it had been stressful and hard work preparing for the moment.

“We worked tirelessly to make sure that people are safe.”

“We can begin to look to the future with a degree of optimism, with this vaccine and other vaccines and more effective treatments,” he said.

“Hopefully in the future Covid-19 will become a more manageable disease and we will begin the pathway to a more normal life.”

Dr McBride added that he did not think this day would come so soon, 10 months after Covid-19 was discovered, as opposed to the more normal 10 years taken to develop vaccines.

He recalled the sacrifices and harm caused by the virus as well as the number of lives lost, and warned there will be more challenging months ahead.

The Royal Victoria Hospital’s centre for delivering the vaccine is a former storage facility which was converted into a clinical environment within a week.

Staff worked “around the clock” to prepare, Ms Sloan added.

She said her daughter, Cailie, was at school and hoped she would be proud to learn that her mother was the first to receive the jab in Northern Ireland.

They live in the seaside town of Dundrum with Ms Sloan’s fiance Chris.

Their wedding was postponed from September and is scheduled for next April.

Ms Sloan said she hopes there is light at the end of the tunnel for them personally too.

“We may get to have our big day after 10 years of waiting.”

Health minister Robin Swann said: “This is a massive exercise and I am pleased we have already started to deliver on our pledge to prioritise care homes in the first phase of the programme, in line with JCVI advice.

“This has been an emotional day, as we start to allow ourselves to hope for a better future in 2021.”