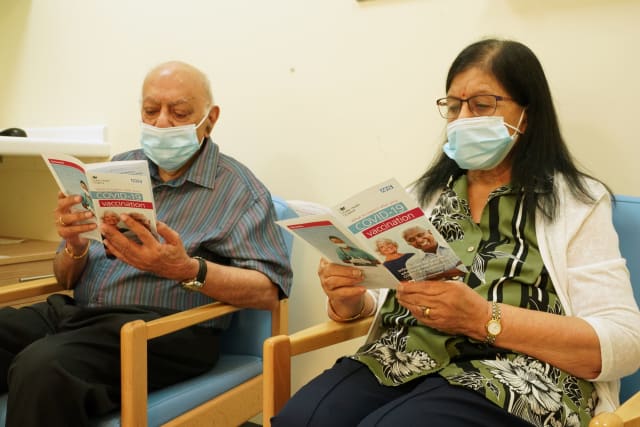 A couple thought to be the first in the world to receive the Covid-19 vaccine have thanked the NHS for the way they have been treated.

There was applause when Dr Hari Shukla, 87, was given the first dose, watched by his wife Ranjan, 84, who went second at the Royal Victoria Infirmary in Newcastle.

Nurse Suzanne Medows said “congratulations” after administering the jab at the top of Dr Shukla’s left arm, then gave him a sticker which said: “I’ve had my Covid vaccination”.

She retired last month but has returned to work to help train colleagues in vaccinating patients.

Afterwards, the couple, who have four children and nine grandchildren, spoke of their pride in being part of history, and thanked the hundreds of people who have worked on the vaccine.

Dr Shukla, who has a CBE for his work in race relations, said: “I feel proud of myself that I have had this privilege of participating in this very important activity.

“I don’t take this for granted because hundreds of people have worked for this vaccine day and night to make sure we got the vaccines in good time, so the lives of people can be saved.

“The whole world is looking at us to see how things go.

“The ways things have been organised has been absolutely wonderful.

“We are absolutely grateful to almighty God for giving us such a wonderful health service, which I feel is the best in the world.”

Mrs Shukla said they had been called out of the blue and were asked if they wanted to be vaccinated.

“When I told my family they were overjoyed,” she said.

She added: “It is such a historic day, I didn’t realise it at the time we were asked but now as time goes on, I see it is something bigger than I was expecting.”

Dr Shukla, a former director of the Tyne and Wear Racial Equality Council and named a Local Hero in Newcastle for his race relations work, wanted to use his position in the community to tell others the vaccine was safe.

He said: “Sometimes people don’t have any contact with the health service, so they don’t fully realise how important it (the vaccine) is, sometimes they have some concerns – ‘should I have it, should I not’?

“I’m saying, go for it. It’s very important you have it, it’s wonderful, and the way it has been produced, all the work they have done, it’s the best vaccine you could ever have.”

The couple said their lives have been greatly affected by Covid and have been staying at home, keeping in contact with their children and grandchildren with Zoom meetings every Tuesday.

Dr Shukla, who was born in Kenya and whose father was from Bombay, said he was feeling “very confident” and “strong” having had the jab, while his wife said she was waiting to see if she would develop an ache in due course.

She said: “I’m not worried about it.”

Around 100 people were due to be vaccinated in Newcastle on Tuesday, returning for a second dose early next year.

The trust was the first in the country to treat coronavirus patients when two Chinese nationals tested positive in January.

“Everyone at Newcastle Hospitals is very proud that we have been able to serve our community throughout the pandemic and we are simply delighted that Dr Shukla, his wife Ranjan, were able to be our first and second patients.

“Since we cared for the UK’s first patients with coronavirus back in January, we have been hoping for and contributing to research to develop a vaccine.

“It’s an honour and a privilege to be able to be among the first in the world to provide vaccinations to our frontline staff, key workers and vulnerable people.”