William and Kate hear of personal Covid-19 tragedies from paramedics 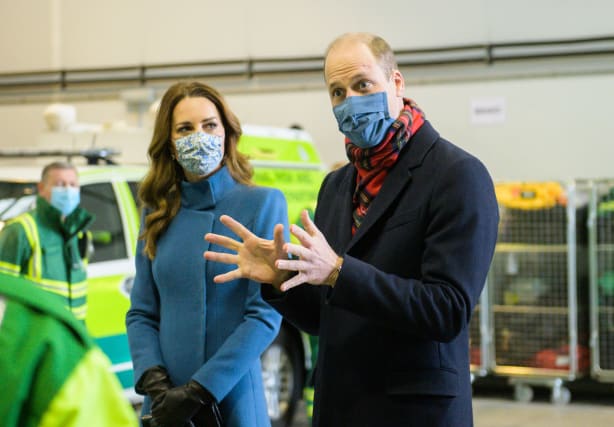 The Duke and Duchess of Cambridge have heard moving accounts from ambulance workers about how they have been personally affected by the coronavirus crisis.

William and Kate met staff from the Scottish Ambulance Service (SAS) in Newbridge, near Edinburgh – the first engagement on their whistle-stop tour of England, Scotland and Wales by royal train.

The duke, dressed in a dark blue coat and tartan scarf, and duchess, wearing a blue Catherine Walker coat and carrying a bag by Scottish designer Strathberry, thanked staff for their efforts in coping with demanding jobs while many were affected by personal Covid-19 tragedies.

William spoke at length with some of the paramedics about how the additional strains of working under the threat of coronavirus had impacted on their mental wellbeing.

He and Kate also heard from paramedic Alistair Matson about how he had to cope with his father falling ill and later dying in hospital during the pandemic.

Mr Matson, 54, said: “It was very emotional talking to the prince about losing my father.

“He was very anxious to hear how we managed to cope with the mental strains of our job.

“I was helped considerably by the great sense of camaraderie at my work.

“There was never any rush to come back and they have been like another family to me.

“It was really heartening to see the royal couple here today acknowledging what we do and their thanks means a lot to us.”

His colleague John Kane told the royal couple how he spent three weeks in an induced coma in Edinburgh’s Western General Hospital after contracting the virus.

The 59-year-old said: “I had to be placed on a ventilator for three weeks and placed in an induced coma.

“It was a terrifying time and the recovery has been slow, but again the SAS has helped that.

“The prince was particularly interested in how we manage the mental wellbeing of our own staff.”

It also emerged during the visit that William and Kate had sent a special bouquet of flowers to the family of a veteran paramedic, who died last month after he re-enlisted in April four years after his retirement.

His funeral was due to take place during the royal visit.

A spokesman for the ambulance service said: “I know that Rod’s family greatly appreciated the flowers sent on behalf of the royal family. It was a lovely gesture.”

The couple also made a particular point of thanking the cleaning staff at the unit, telling cleaner Ellen Reeder, 65, that she was “one of the most important people in the whole organisation, keeping everything together”.

Afterwards, Ms Reeder said: “It was such an honour for me to meet them. They kept it secret until this morning, which is just as well or I would have got tongue-tied speaking to them.

“That has really made my day. In fact, I think it has made everyone’s day here to get that appreciation from the Royals. I am a huge fan.”