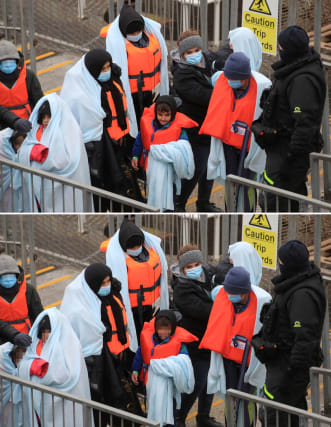 More than 100 migrants crossed the English Channel to the UK despite near-freezing conditions and biting winds on the coast.

Five children wrapped up against the bitter cold – including a baby without socks or shoes – were among those seen arriving in Dover on Monday morning.

The arrival of 111 people on small boats comes despite a recent £28 million agreement between the UK and France to double police patrols on French beaches.

This morning, five children were seen being brought into the Port of Dover aboard a single Border Force Rib, along with a number of adults.

They are believed to have been picked up in the Channel by Border Force cutter Vigilant after departing from France.

The youngsters, some too young to walk, were visibly suffering from the 1C temperatures at the Kent port and were wrapped in blankets and life jackets.

Among them was a baby who did not have shoes or socks, being carried ashore in the arms of a woman

Despite continued vows by Home Secretary Priti Patel to make the route “unviable”, there have been unprecedented numbers crossing the Channel in small boats in 2020.

Last month, Ms Patel hailed a new agreement with her French counterpart aimed at curbing the number of migrants reaching the UK in small boats.

But the £28 million deal has not stopped people making it to UK shores, as Monday’s arrivals appear to show.

Kent County Council announced it had resumed taking in unaccompanied migrant children who arrive on boats, almost four months after it said it could no longer safely care for any new arrivals, prompting a scramble to find places elsewhere in the country.

But the council warned that a long-term solution still needs to be implemented to avoid services being overwhelmed again.