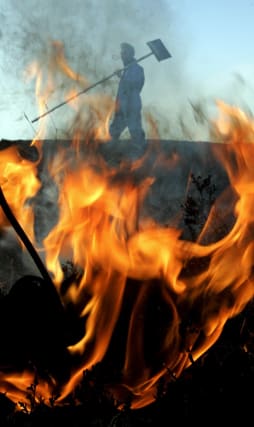 The RSPB has criticised the agency advising the Government on the natural environment for failing to get to the bottom of why so many of England’s protected landscapes are in poor condition.

Around 6% of land in England has been designated a Site of of Special Interest (SSSIs), but 61% of these sites are assessed by ecologists to be in a poor condition –  an area about the size of Gloucestershire.

But Natural England has offered no reason as to why this is the case for more than 50% of theses sites, according to the RSPB, as they have been classified as “recovering”.

A reason for the landscape’s decline has only been identified for 8% of cases.

The wildlife charity said the biggest identified threat to SSSIs was burning of moorland to clear flora to facilitate grouse shooting.

Other major of causes of environmental degradation are overgrazing by livestock and water pollution – particularly from chemicals and fertilisers from agricultural run off.

The RSPB said failure to pinpoint the drivers of ecosystem decline jeopardised Natural England’s goal of returning 75% of SSSI’s to “good” condition by the early 2040s.

The charity said lack of monitoring means that progress in many areas has either stalled or is going into reverse.

The RSPB’s head of site policy, Kate Jennings said “Many of these ‘recovering’ sites are not recovering at all.

“Natural England put many SSSIs into this category a decade ago because it assumed that entering into a plan or agreement with the landowner would automatically lead to the restoration of the site, without considering whether the plan was being funded, implemented or proving effective.”

Ms Jennings said “large amounts” of public money had been spent setting up ineffective recovery strategies with landowners, including some allowing the continuation of harmful practices such as moorland burning.

As well as the carbon dioxide release by the practice, moorland burning also damages peatland and destroys habitats of many threatened species.

Natural England has seen its baseline funding cut by 45% since 2014, and last year was forced to set up a crowd funding campaign to plug the holes in its finances.

In November, Natural England’s chairman Tony Juniper wrote to MPs warning them it was unable to carry out the necessary monitoring of SSSI’s due to funding cuts.

“We have reduced investment in the monitoring of our SSSI network meaning we do not have a current robust evidence base around the state of our SSSIs, their management needs etc,” he said

Mr Juniper said the agency was also struggling to meet its responsibilities in the areas of land use planning, species recovery, wildlife licensing and national nature reserves.

The RSPB estimates 70% of SSSIs have not been monitored for the last six years after Natural England’s funding for the task was cut from £2 million in 2011 to £700,000 last year.

The charity is now calling on the Government to ban peatland burning as a “quick win” in achieving its conservation targets and helping fight climate change.

Ms Jennings said: “This is a critical next step in protecting and restoring our internationally important upland peatlands.

“The Government has repeatedly promised a ban but has not yet done so.”

She added: “It is also essential that SSSIs are regularly monitored, so that we know what state they are in, what is causing damage to their wildlife and what actions need to be taken.

“Without this, achieving the Government’s target will be impossible.”

A spokeswoman for Defra said: “We are committed to driving forward a green revolution as we build back better and greener from the pandemic.

“As part of this, we plan to improve the management of our Sites of Special Scientific Interest (SSSIs) and to bring 75% of the area into favourable condition.

“Natural England is working with landowners and managers and others to improve the condition of our protected sites as a core component of our Nature Recovery Network.”

Last week, a 16-tonne bulldozer was used to illegally straighten a mile-long (1.5km) stretch of river in an SSSI in Herefordshire – stripping it of trees and destroying swathes of rare habitat.

Local charity the Herefordshire Wildlife Trust (HWT) described the damage caused to the River Lugg as a “crime against the environment”, adding that the perpetrators would have been “well aware” of the area’s status.

The incident is being investigated by both the Environment Agency and West Mercia Police.