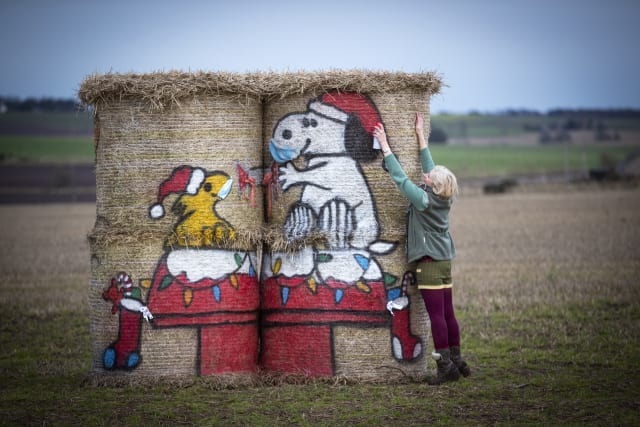 A farmer has unveiled food-themed hay bale artworks as a way to raise charitable funds.

Fleur Baxter spraypainted cartoon characters and ingredients such as Brussels sprouts for a Christmas fundraiser.

The artist, nicknamed “Balesy” by locals, is allowing members of the public to visit the pieces at her farm in Carmyllie, Angus, in return for donations to food banks.

She told the PA news agency: “They all have a food-orientated theme as I’m collecting for food banks, but you also have Snoopy and Woodstock pulling a cracker.

“It’s just to be lighthearted and give people something to smile about.

“There has not been a lot to smile about this year and there will be so many families who are struggling.

“I hope seeing my artworks will make people think about donating if they can.”

Ms Baxter began making hay bale artworks in 2014 in the run-up to the Scottish independence referendum, when she painted two minions who were holding a saltire and Union Jack.

Since then she has produced pieces including Angry Birds and Winnie the Pooh characters, focussing on mental health.