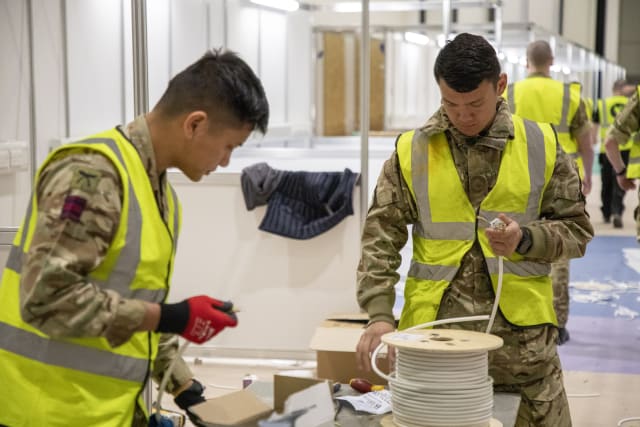 Armed forces personnel have been deployed in efforts to construct Covid-19 vaccination centres, a defence minister has confirmed.

During Defence questions, James Heappey told the Commons: “Defence is working closely with other Government departments, particularly DHSC (the Department of Health and Social Care) and BEIS (the Department for Business, Energy and Industrial Strategy), to assist on vaccine rollout plans.

“Sixty military planners are integrated within the vaccine taskforce and Defence has deployed 56 personnel to assist in constructing vaccination centres.

“Defence obviously stands ready to provide further support to the NHS in meeting the challenge of vaccinating the UK against Covid-19.”

He said: “There are welcome reports that our armed forces are to support the NHS with the rollout of the coronavirus vaccine, performing vital work to transform sites across the country into distribution hubs.

“However personnel are already stretched and resourcing is a key concern after a decade of defence decline. Will the minister update the House with real detail on how he is taking steps to make sure that resources are needed to perform their vital work safely?”

Mr Heappey replied: “Indeed there are 2,600 service personnel deployed right now. The winter preparedness package is 13,500 people… and we’re confident that in generating that package, we have not in any way damaged Defence’s ability to prepare for operations that are currently required, or indeed are required within the next six months or (more).

“So everything that Defence is doing – and we’re very proud of the 13,500 we’ve been able to generate – we’re able to do without threatening Defence output and we’re delighted to be playing the part that we are in supporting the country at this important time.”

Mr Heappey said he expected armed forces personnel to be properly accommodated while helping carry out testing operations across the country.

Labour MP Rosie Cooper (West Lancashire) asked: “Our armed forces have helped to deliver successful whole-town testing in Liverpool, and we’ve heard today that the MoD plan to use MACA (Military Aid to the Civil Authorities) support for more testing and preparations to roll out Covid vaccines.

“Can the minister indicate whether good quality local accommodation, together with extra funds, will be provided to the armed forces to help them with this vital work?”

Mr Heappey replied: “Clearly these are matters for operational commanders but my expectation would be, of course, that those who we deploy to do this important work at such an important moment for our nation are properly accommodated and fed whilst they’re doing those duties.”

Mr Heappey replied: “I know how much my own family enjoyed my pass out parade at Sandhurst. These are big, big moments in the life of soldiers and the family that support them.

“We have to work within the Government’s guidelines but as soon as we can get parades open to family and friends again we will do.”