Almost 75% of military families have been separated at Christmas, survey finds 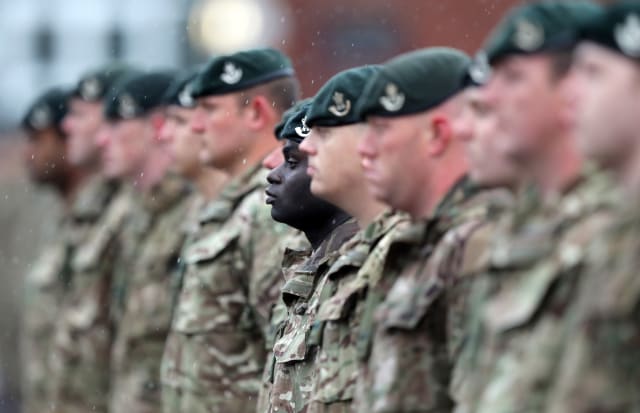 Many families across the UK will be celebrating Christmas apart for the first time this year, but separation over the festive period has previously been experienced by almost 75% of those in the military, according to a survey.

Research found 81% of the military community has been separated from loved ones throughout the year, for a typical duration of between one to nine months – due to training, deployment or geographical distance.

This compared to 51% of the general population, who said they had never been apart from their loved ones.

In total, 73% of those in the military community said they had previously been separated from their families at Christmas.

Coronation Street star Antony Cotton, an ambassador for Armed Forces charity SSAFA, called on people to remember that the exceptional circumstances of this Christmas are the norm for many of those in the military.

“I think we have taken time spent with our loved ones for granted in the past – but, as a result of the Covid-19 lockdowns and restrictions, I hope that this will change now,” he said.

“We have all experienced time without this valuable support network over the last nine months but imagine if this kind of separation was a standard part of your life.

“This pandemic has given us a chance to take stock of the things that truly matter to us – but also it should be a chance for us to show our gratitude to all of those forgotten heroes who sacrifice precious time with loved ones every year to ensure that we are safe and protected.”

He said the nation owed a “huge debt” to those serving in the military, as well as their families.

The research involved a survey of 2,023 members of the public, and 517 respondents in the military community, in November.

A total of 71% of civilians said they had felt lonely and isolated due to time apart from their families this year.

Those who took part in the survey said they used phone and video calls, WhatsApp and social media to keep in touch since the coronavirus pandemic.

Chris Lewis, 40, is currently walking the UK coastline to raise money for SSAFA.

He spent the first lockdown in complete isolation on a previously uninhabited Shetland island, Hildasay.

Mr Lewis, who has been separated from his daughter during his challenge, said: “What works for me is keeping myself busy, keeping myself constructive, learning new things, and being healthy.

“I think health is such an important thing because it can really make you feel different about yourself.

“Those are key factors for me and have really seen me through real isolation and complete loneliness.”

Johnson ‘understands frustrations’ of businesses struggling to export to EU