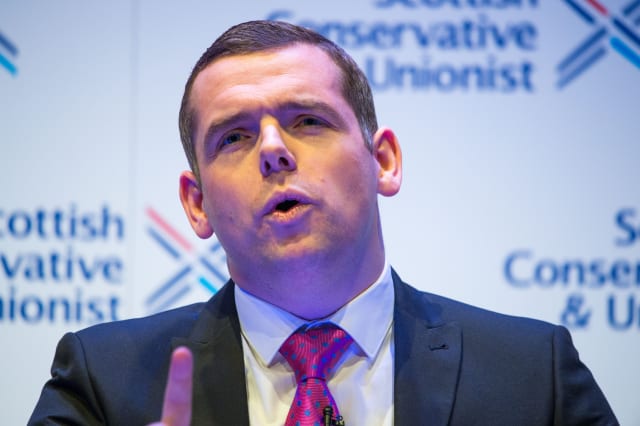 Douglas Ross has accused the SNP of wanting to “get rid” of the community togetherness seen during the Covid-19 pandemic to “divide” Scotland with a second independence referendum.

The Scottish Conservative Party leader argued the SNP “mask is slipping” as he hit back at First Minister Nicola Sturgeon’s claims independence is “essential” to help with the task of rebuilding Scotland after coronavirus.

Mr Ross also claimed the SNP Government wants to “use every opportunity to further their aims” for making Scotland an independent country, adding “their priority is separation at all costs”.

He told the PA news agency: “I think throughout this pandemic, we’ve seen communities coming together to support each other and that’s been one of the few positives out of Covid-19 is how we’ve all worked together, how we’ve put aside differences for the greater good.

“And the SNP wants to throw all that in the bin, get rid of all that and divide our country, our workplaces, our families again over a constitutional argument when the priority should absolutely be on getting on top of this virus, rebuilding our economy post-Covid.”

He added: “Nicola Sturgeon tries to portray herself as someone who is solely focused on dealing with the Covid pandemic when that’s clearly not the case.”

Polling, he added, was “very clear that people do not see another independence referendum as a priority for them in the next Parliament.

“They expect the next Scottish Parliament to be focused still on the Covid pandemic and how we as a country can together rebuild after the effects of Covid-19.”

The UK Government, he said, had delivered £9.5 billion additional spending for the Scottish Government to deal with Covid, protected jobs and supported businesses, adding: “The SNP are unable to answer how they could have done all that in an independent Scotland.”

He said people were “fed up of manufactured grievances that we see from the SNP trying to pick a fight, politicising issues, rather than just rolling up our sleeves and working together”.

The MP for Moray said: “I thought it was very telling that even during a global pandemic when lives are being lost in Scotland and people are worried about their jobs or their businesses and their future that the SNP revert to type.”

Another “divisive” independence referendum would mean “pitching families, communities and workplaces against each other, rather than focusing on the powers that we do have and using them to improve Scotland”, Mr Ross argued.

He added: “My view is we’ve got a lot of powers at our disposal and we just need a Government that’s willing to use them to improve the lives of people across Scotland.”

Mr Ross quit as Scotland Office minister from Mr Johnson’s Government in May, after hearing the Prime Minister’s then senior advisor Dominic Cummings’ efforts to defend his trip from London to Durham during the Covid-19 lockdown.

Mr Ross insisted “working together is going to achieve far more than these petty fights we see between the Scottish and UK Governments at the moment”.

He went on: “The Prime Minister has been clear he believes in devolution, he is just frustrated as many Scots are that devolution has not delivered as much for people across the country as it could have done because for the last 13-and-a-half years, the SNP have used devolution for their own benefit to, in their view, advance the case for separation, rather than actually delivering devolution and focusing on all the services.”

There were, Mr Ross said, “still major holes” in the SNP’s case for independence following the 2014 poll, adding: “There are huge gaps in their argument for how a separate Scotland would be run, would be financed, would work in reality and these questions have not been answered.”

Looking ahead to next year’s Holyrood election, Mr Ross said: “I don’t put a limit on my ambition” adding his party offered an alternative for voters to the “tired” SNP Government.

In response to the remarks, SNP depute leader Keith Brown said: “Douglas Ross seems to be living in a parallel universe – and with poll after poll showing that independence is becoming the settled will of the people of Scotland, it is no wonder he is in panic mode.

“It beggars belief that, during the middle of a pandemic, Boris Johnson is ploughing ahead with his Brexit obsession and is threatening a catastrophic no deal in just a few weeks’ time, which could devastate jobs and the economy.

“Just last week, a widely shared interview clip showed Douglas Ross desperate to talk about independence as the interviewer repeatedly tried to ask him questions about the pandemic.

“By contrast, the SNP Government is focused on steering Scotland safely through the pandemic and standing up for Scotland’s interests and right to determine our own future.”