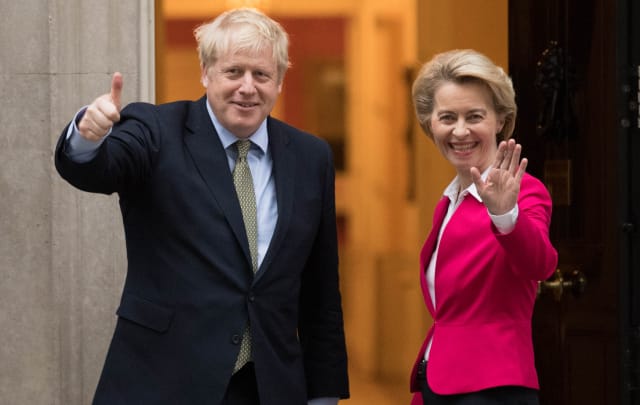 Boris Johnson and European Commission president Ursula von der Leyen will assess whether a post-Brexit trade deal can be salvaged following a weekend of tense negotiations.

In the febrile mood surrounding the talks, Britain denied reports from Brussels that there had been a breakthrough on the thorny issue of future fishing rights.

Reports suggested they had agreed to a transition period for phasing in changes for access for EU boats to UK waters of between five and seven years.

However a UK Government source said: “There’s been no breakthrough on fish. Nothing new has been achieved on this today.”

The two leaders will speak on Monday evening – their second call in a little over 48 hours – after their top negotiators spent Sunday locked in detailed talks.

Lord Frost and his EU counterpart Michel Barnier were ordered back to the negotiating table in a final push to see if they could break the stalemate.

However Irish premier Micheal Martin, who has been closely following the talks process, warned that they remained on a “knife edge”.

He said there appeared to be a “very challenging issue” still to be resolved over the so-called “level playing field” rules on fair competition.

“My gut instinct is that it is 50-50 right now. Things are on a knife edge and it is serious. I don’t think one can be overly optimistic about a resolution emerging,” he told RTE.

The talks were due to continue in Brussels on Monday after Mr Barnier has briefed a breakfast meeting of ambassadors from the 27 EU member states on the state of play.

EU negotiators are reported to be insisting on a “ratchet clause” under which the UK would face additional tariffs if it failed to mirror changes to EU rules on issues like environmental standards and workers’ rights.

During a round of broadcast interviews, Environment Secretary George Eustice warned the UK could not accept any conditions which “fundamentally violates our sovereignty”.

“Where it becomes difficult is where the EU starts to say things like, unless you clear your agreement and regulations with us before, we reserve the right to pull certain parts of the agreement and to undermine what’s been agreed,” he told Sky News.

Following their earlier call on Saturday, Mr Johnson and Mrs von der Leyen acknowledged that there were still “serious differences” to be resolved on fisheries and the mechanism for resolving disputes as well as competition rules.

While the two sides have been circling round the same issues for months, it is unclear whether the intervention of the leaders has created the political space for the negotiators finally to bridge the gap.

What is agreed is that time is rapidly running out.

Before then it has to be ratified by both Houses of Parliament in the UK and the European parliament as well as signed off by the EU leaders.