Gordon Brown confident Scots would not vote for independence 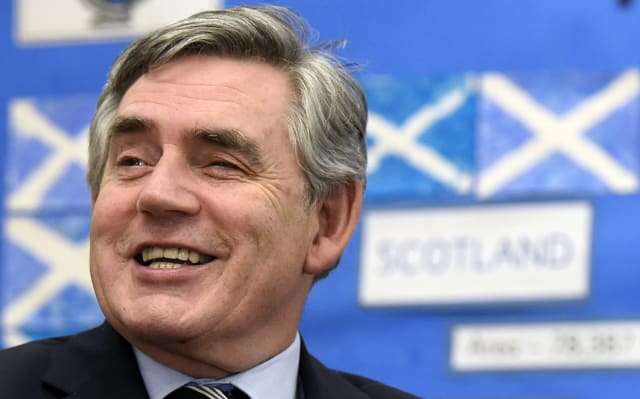 Gordon Brown has said he believes Scotland would not vote for Scottish independence but branded Boris Johnson “out of touch” over devolution.

The former prime minister predicted that Scots would vote to remain part the UK in another referendum but warned it would be a “hard battle” to keep the union together.

Mr Brown also described Boris Johnson as “completely out of touch” after the Prime Minister said Scottish devolution has been “a disaster”.

Speaking on Sky News’ Sophy Ridge on Sunday programme, Mr Brown said: “I think if there was a referendum, we’d win and Scotland would stay in the United Kingdom.

“But it’s got to be a hard battle because people are frustrated, they’re fed up, not just in Scotland, but in the regions of England and Wales.”

He argued there should not be another independence referendum next year amid the country’s economic recovery from the pandemic, the vaccination rollout and any further waves of coronavirus.

Referencing Mr Johnson’s comments on devolution, Mr Brown said: “He’s completely out of touch and that’s why he is not popular in Scotland.

“But neither would he be popular in Wales where people want devolution to work.”

Suggesting that Mr Johnson “has got to do something to show that he cares about Scotland”, Mr Brown added: “In the end, it’s you, the Prime Minister, that’s got to try to unite the country.

“You can’t rely on different parts of the country coming together automatically, you’ve got to bring people together.”

Following the coronavirus pandemic, Mr Brown said there has to be a “far better balance between the powers that the nations and regions hold” and the Westminster Government.

The former MP for Kirkcaldy and Cowdenbeath argued more economic, public health and employment powers should be held by the devolved nationals and England’s regional mayors.

“There’s something quite wrong about the British constitution now that we have a multinational state – we have regions with a great deal of different needs and different traditions and different cultures and different desires,” Mr Brown said.

“But this Government has not found a way of co-operating with them, of consulting them, of working with them.”

He continued: “This really matters because we failed on test and track, as far as I can see, we were too slow on testing, there’s a huge stand-off about the local lockdowns.

“We’ve got a huge issue coming up on vaccination.

“It’s great what the scientists have done, but unless we have local systems of delivery that are co-ordinated with the training of people and the supply and the logistics to get supplies there, then that vaccination thing will not work the way it should.

“It’s a huge task ahead of us and so the British way of governing has got to change if we’re going to meet the needs and aspirations of people in all parts of the country.”

Asked what advice he would give Chancellor Rishi Sunak, Mr Brown said: “I used to say when I was the chancellor, there was only two kinds of chancellor – there were those who failed and those who got out just in time.

“And if I were Rishi Sunak, I would think that – having given out all this money – his problems are really now beginning and I think he is going to be tested.”

Mr Brown, whose 10 years in the role make him the longest-serving chancellor of modern times, added: “He must plan a recovery and not rest on his laurels.

“Because we’ve had a rescue operation, we need a recovery operation now and I don’t think that is forthcoming yet from the Government.”